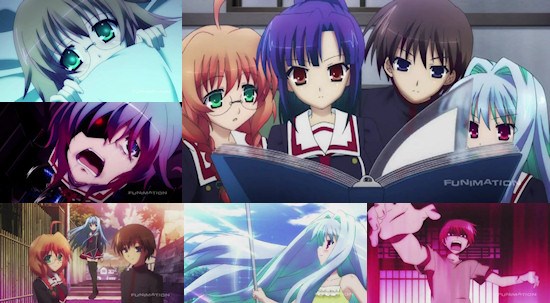 Everyone loves receiving an unexpected parcel delivery, with all of the excitement that finding out what's inside it brings.  At least, almost everyone loves to receive a mysterious package on their door step, with one notable exception being the protagonist of C³, Haruaki Yachi.  Instead, the delivery of a heavy box to his door elicits a sigh from Haruaki, as he ponders what strange artefact his father has sent him to look after in his stead this time - clearly, this is a regular occurrence for Yachi.

Of course, we find out about the contents of this box soon enough - in fact, we find out that the item of interest is the box itself.  A box that turns into a girl, no less, and one with a fondness for rice crackers to boot.  While this might seem shocking enough, Haruaki is relatively unperturbed as he introduces himself to the girl in question - a cute but occasionally fierce girl named "Fear in Cube", who is in fact a cursed tool used to contain negative emotions.  Luckily for Haruaki, he's immune to any such curses, leaving him free to take in and look after Fear, even if it ruffles the feathers of childhood friend Konoha Muramasa.

So begins a new chapter in Fear's life, as she gets to enjoy the everyday mundanity of cleaning the house and attending school, even if she proves to be less than capable of the former.  Given the full nature of the powers contained within her however, such peace is decidedly fragile, and Fear and company are soon presented with the threat of those who seek to rid the world of cursed tools such as Fear.  Luckily, Fear isn't alone in her struggle to stay alive and rid herself of her curse, as Haruaki seems to prove surprisingly successful at surrounding himself with cursed "tools".

This scenario pretty much sets up the dual pillars which hold C³, as it proves to be part supernatural action series, part harem fan service comedy which never forgets to squeeze a panty shot or two into the frame wherever possible.  To be fair, this particular blend of elements works pretty well for the show's first story arc with its focus upon Fear herself, but once this is done and dusted the rest of the series' arcs are very much a case of "rinse and repeat" - introduce or out a "cursed" character, see them through to their redemption by way of some action, combat and dashes of brutal violence.

The main saving grace of the series is that it's pulled off with lots of visual panache - yes, pretty much every aspect of the show's aesthetic is readily borrowed from the low-budget, high-impact style familiar to anyone who has watched the SHAFT studio's output in recent years, and when it comes to presenting C³'s dark, otherworldly combat it works fantastically well, let down only by the low quality of FUNimation Entertainment's YouTube stream.  The trouble is, so striking are these visuals that you get the impression that they're propping up the rest of an otherwise hastily assembled show - episodes dump important information in a care-free, almost apathetic manner, while characters dip in and out of proceedings as the story suits without ever giving us opportunity care about them too much beyond the colour of their underwear.

Here is a series that seems more concerned with shouting out "Hey, look, panties! And blood and gore! Watch me!" that properly building or realising its story and characters, and the result is a piece of shallow, throwaway entertainment that's well suited to the streaming format - it's a series you might well enjoy watching once so that you can coo over some of the slicker visuals or enjoy the show's catchy opening themes, but it isn't one you'll want to pull off the DVD shelf over and over again as other series present the main values and concepts of C³ in far more compelling ways.

In closing then, Cube x Cursed x Curious is a series that we'd certainly add to a "watch if you're bored and at a loose end" list - it's a smart and colourful visual spectacle that has its moments, even if its story sinks into the murky depths of mediocrity for the most part.

C³ is currently available to the UK in streaming form via FUNimation Entertainment's YouTube channel.

6
Smart visuals add some panache to this piece of throw-away entertainment that might just work as a way to while away a few hours in this streaming form.
LATEST REVIEWS