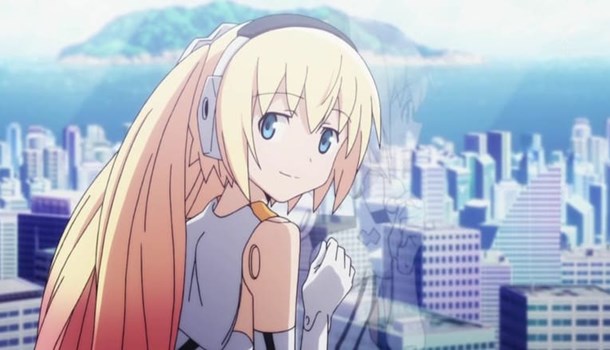 Coming late to the stage this season thanks to some behind-the-scenes delays at Anime on Demand, Buso Shinki has now arrived ready to prove that it’s worth the wait. But is it?

Buso Shinki, like Girls und Panzer (also airing this season), is a show that sets out to defy your expectations. A lot of the advertising, the pre-credits sequence to the first episode and the credits themselves lead you to believe that you’re about to see an Angelic Layer-style fighting tournament show but, whilst there are elements of that around, it certainly isn’t a particularly major plot point in the series.

The recipe for Buso Shinki is a little unusual, combining Angelic Layer with Steel Angel Kurumi and then gently pouring the result out into the mould left by slice of life shows like K-ON. You see, although there is some combat and action here and there, the show is much more concerned with character development and comedy, which is great considering that the comedy is brilliant and the characters instantly lovable!

Over the first few episodes you’ll be introduced to the earnest Anne, the clumsy big sister-type Lenne, and the requisite tsundere - the boisterous Ines - and the moody Hina. Surrounding them are a whole host of supporting characters, all of whom fit perfectly into the world. There’s nothing particularly new in any of the characters, who all play unashamedly to type, but at the same time you can’t help but enjoy watching them and they manage to generate some really genuine emotion at times, which is impressive. In fact, you’ll probably spend 90% of your time following a viewing cursing that you can’t rush out and buy a Shinki of your own!

Like the characters, the comedy doesn’t do a huge amount that’s new per se - once you've seen one gag about a very small person in a giant world and you’ll have seen 'em all - but everything here feels very polished and fresh in spite of this. Whether the gang is cooking up a meal or chasing a love letter there’s plenty to enjoy. Things kick up into an even higher gear in the fourth episode with an absolutely brilliant Wacky Races parody that’ll have you chuckling for a while afterwards! There’s no over-arching plot at the moment – one suspects that the decision not to go down the fighting tournament route precluded this – but honestly it’s not missed.

Animation-wise things are certainly good though not spectacular (though this may improve by the time a physical release turns up) and everything feels pleasantly smooth with the CG elements not proving too intrusive. In other words, it’s exactly what is needed in this kind of show.

Sound-wise things are still good with strong songs by the voice cast for the opening theme and Azusa for the ending, and the cast provide an excellent performance which succeeds in bringing real heart to the show; this is particularly true of Kaori  Mizuhashi as Ines, a seiyuu perhaps known best for her prior work as Tomoe Mami in a little-known show that has attracted some small amount of critical acclaim on this site....

If I had to be constructive about the show then about all you could say is that it is very light. As previously mentioned there’s no sign that any kind of overall plot will turn up and everything is very wholesome – in fact the ‘bad guys’ rarely have any kind of evil plan beyond playing a vaguely mean prank on our heroines. But then again, what do you expect from a series based on a line of collectable dolls?

I honestly really like Busou Shinki. It’s heart-warming without being too saccharine, the characters are cute and lovable and I can’t wait to keep watching. In a time when Slice of life shows are starting to wane in terms of originality and drag on far past the point where perhaps they should have ended, it’s a joy to watch a series that seems to just encapsulate everything that was ever good about them!

You can currently watch Buso Shinki in streaming form via Anime on Demand.

8
A simple but genuine pleasure to watch!