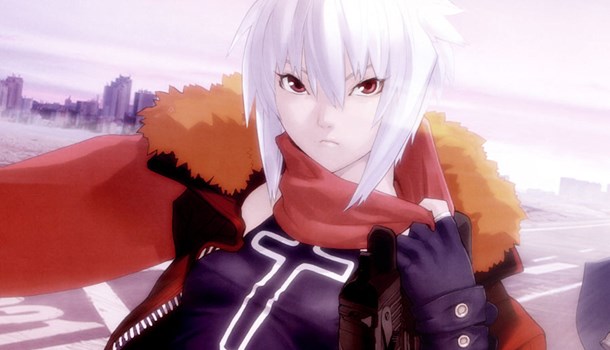 Meh! I've been sitting in front of a computer screen for ages to think of the best way to open up the review, trying to put my thoughts and feelings of this series into a coherent structure that would paint of picture for the reader of the review. The best way to describe this volume seems to the very first word you read. Meh! And I had such high hopes for this series… life is an evil trickster.

Volume 2 kicks off with Meg going undercover at a elite prep school for girls to uncover if a student has seen something bizarre or if she's just off her rocker. This is then followed by Meg being captured by a giant bird, weapons being injected and a general race against time. There's nothing really pushing the main story along in this stand alone episode.

After seeing the artwork and basic summary of Burst Angel, I’d be lying to say it didn’t perk my interest. OK, the first volume was a little weak, but by setting the scene, surely the following volumes would give the viewer something to sink their teeth into…right? RIGHT?! Well…no. unfortunately, this volume is as weak as the previous volume and really doesn’t make you want to watch what’s going on.

Only Noir shares the dubious accolade of making me check my watch and hoping the episode was soon over. Looking at my notes during the review, I wrote “generic” and “seen it before” so many times its unreal. Plus I did a doodle of Sonic, he was angry at my over use of the word generic. He gets very angry. (You're scaring me... - Ross)

But I digress. The storylines for each episode aren’t that bad with a standard anime they may have been passable. But it’s the characters themselves that help destroy the show and I doubt that will change at all towards the end of the series, let along this volume. Meg is a the usual sharp tongued, but oh so nice and cute character, Jo is the quiet one, but does most of the fighting, Sei is older, intelligent and therefore the leader of the group, leaving Amy as the techno-brat who does all the tech work. Oh, and token male character Kyouhei, who is (surprise) awkward and the cook to boot. Oh, and he wants to go to France to be a pastry chef. Noble indeed.

Quite frankly, this was one of the few series’ that I was looking forward to and unfortunately, now I’ve seen the first two volumes, I have little drive to watch any more of it. The characters, locations and action are very generic. They’ve been done before so many times in countless anime that really does feel like a copy of a copy.. The characters do their best to make themselves unlovable and I didn't care much what happens to them. The basic story has the basis for a Cowboy Bebop on Earth style show, but with weak characters (who may as well be naked with the amount of fanservice there is) and generic battle sequences set in uninspiring situations. If this were dog food (which it is, metaphorically) the dog would likely go blind or spit it back up from the bad taste it leaves.

Check out the review of Burst Angel Volume 1 for a run down of what is seriously wrong with this anime. But prove me wrong Burst Angel or you’ve only got yourself to blame.
2
It's not carrying it's weight. This volume crushes my hopes for improvements.
LATEST REVIEWS