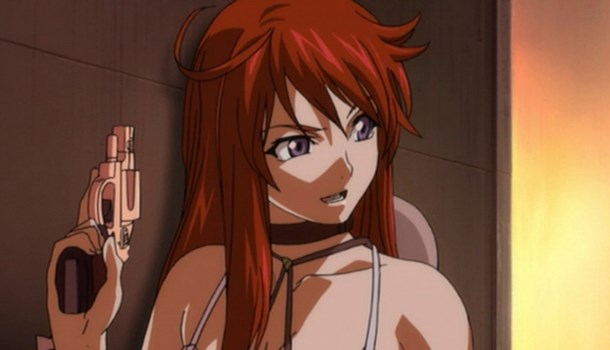 We open with a shot across a wasteland. Some construction equipment can be seen but so can a lot of debris. We see a raised highway that ends abruptly. Abandoned in construction or repair? Who knows. A crow flies across the land and attempts to settle on a small monument only for a skeletal robot hand to snatch upwards from the ground and grab it. The rest of the rusted, terminator-esque figure rises up and begins to eat the crow. Then the rest of the robot begins to rise.

It's a giant figure made from girders, cables and other seemingly scavenged parts, roaring it's defiance to the sky.

Up on the raised highway, a mech poses. Twin, belt fed pistols crossed over it's chest. It opens up on the body of the robot, bullet casing pouring down but to little effect. Wheels deploy under the mechs feet and it tears off down the highway, nimbly avoiding the lashings of huge cables which crush the road surface. A leap into the air over the giant robot, a deft change of ammunition type and the mech shoots straight down onto the small skeletal figure on the top.
The giant robot falls, pieces falling to the ground around the mech.

Cool huh? As far as openings go it's pretty sweet. It's all beautifully rendered and obviously they spent a lot of time and money on it.

And that would seem to be the root of the problem I have with Burst Angel. Y'see it looks like they've spent 80% of the series' budget on about 5% of the animation. Most of the animation for the episodes on this DVD looks to be on the cheap side of average and some is just so dreadful that I wouldn't have believed it if I hadn't seen it. One scene of a road with some cars passing round a corner leaps to mind.
The cars moving away from the camera jerk their way through nine frames into the distance in the order of red, yellow, blue, and green.
And that's it. There's only four cars and they cycle through the same order several times. The cars coming towards the camera cycle through a similar pattern but as they jerk towards the camera with no motion blur or anything it has the curious effect of making them look as though they're slowing down. When the last frame is shown you momentarily see a seemingly stationary car - which then simply vanishes. That's the sort of basic fault that would get you a fail at an animation school.

It's just so confusing. Why make some of the bits with the mechs in look so good and then leave others looking so shockingly bad? For me the contrast was so jarring that it annoyed me intensely.

Brace yourselves, I've a lot more to rant about.

So lets talk about stupidity. Our main tough chick is shown at several times to be a crack shot. Yet sometimes she can't hit the broad side of a barn door. On one occasion she leaps out of a building lands and empties two entire clips of her pistols at some bad guy who's standing about ten metres away. Meanwhile he's standing up and emptying an entire clip of an assault rifle at her. Both of them miss with every shot. How? Beats me but it looks dumb and if you keep watching there's other similarly dumb scenes every now and again that'll leave you wondering how the hell the director got away with making this.

Now lets talk about rip-offs. There's four girls, one tough and occasionally psychotic, one cheery, one diminutive techy and the dark leader. They hang out in a huge trailer truck that also acts as a carrier for their mech. Hmmm. Some parallels with Bubblegum Crisis (BGC) there.

The law enforcement (of a sort) of Burst Angel wear body armour and masks, have heavy carriers and flying vehicles all of which bear a striking resemblance to those from BGC. There are creatures/robots capable of joining with nearby objects. There's a powerful company carrying out experiments on innocent people. For heavens sake, there's even some scenes which are near identical to those from BGC! Clearly some cribbing has been going on here.

The dub is acceptable, and about the same standard as most bog-standard anime, but for the best experience, I'd still recommend the subtitles that are, thankfully, standard with most MVM releases.

So what we ultimately have here is a pale imitation of a classic series, for which the best that can be said is that it has some (read: few) nicely animated sequences, but otherwise drowns in a pool of it's own mediocrity.

2
Occasionally pretty but otherwise sub-standard in all areas.
LATEST REVIEWS