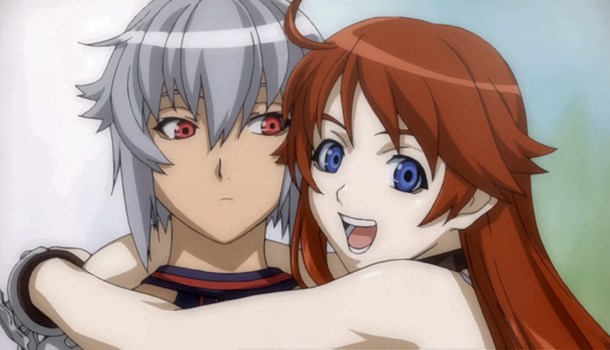 It’s hard to imagine that after the train wreck of a series that was Burst Angel, anyone would want to carry with more. Looking over the past reviews done by four different reviewers, we all pretty much came to the same conclusion. But yet there seems to have been a big enough fanbase for the series to produce this OVA. How odd...

This single episode OVA is more of a side-story than a continuation of the main series, exploring the past of Meg and Jo before they become mercenaries and before Meg's breasts balloon to inhuman proportions. The pair arrive in the city to visit Shirley on her birthday to discover that she has been hurt by a murderer that is on a rampage through the city. In trademark style, the pair decide to hunt down the killer and in the process do what comes naturally. Jo fires her gun a lot and Meg just gets in the damn way and pouts.

Unless you’re a die-hard fan of the series (odds say that there must be at least a handful) then you’ll enjoy more gun-toting action from the pair. The OVA is only half an hour long and is unlikely to add more fans to the series, but anyone who enjoyed the original should find much to enjoy here.

The DVD does have something more than just one half hour episode… thankfully. “Battle Records of all 24 Episodes” is pretty much what it sounds like. A 90 minute roundup of each episode, cut down into smaller chunks. The highlights actually make for an entertaining watch, and by ditching the more mundane aspects of the series, it becomes a far better way to view the series.

Other extras include the “Light and Darkness of Jo” as well as the previews of the 2nd season (that never happened) and the OVA itself.

And that’s it. At the end of the day you’re paying for the one episode and not the extras that come on the disc. Fans will have to decide whether the half hour of new material is worth the money, but for anyone else it's not a bad way to catch up with the series as a whole - certainly its the cheapest way to do so!

It’s a shame as Ugetsu Hakua’s character designs and artwork for the series are fantastic. Shame the series didn't live up to the top-notch designs.

Light and Darkness of Jo
Battle Record of all 24 Episodes
Preview of the TV series
Preview of the OVA
Ugetsu Hakua (Character Design) special
4
A puzzling offering for fans, a reasonable redux for those that wanted to try it.
LATEST REVIEWS