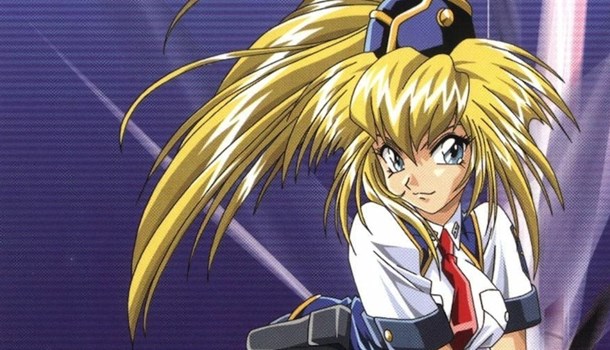 When I first heard about the Burn-Up series, I was quickly interested in getting it (Hell, I'm interested in practically any anime with sexy characters in!). And after watching Burn-Up W, I wanted to see exactly what happened afterwards. This is where Excess comes in.

Burn-Up Excess has the same characters as Burn-Up W, including Team Warrior along with some new characters who actually play big parts throughout the 13-Episode series. Rio is still her typical self, a dynamite Blonde with a habit of spending more then she gets. Maya is just as gun-crazy as before, and would still rather shoot someone then spend a night with them! Nanvel is the brains behind all of Team Warrior's gadgets, but usually tends to get far too attached to them and makes them resemble cute pink rabbits, mice or even a pink cockroach! Then there's Lilica, the only memeber of Team Warrior who spends more time behind a desk on her computer than actually going out into the field. Oh, then there's Yuji, the only male character of the crew and by far the most perverted who always get's what he deserves whenever he tries to peep on the other Team Warrior Members. And finally, we have Maki, the leader of Team Warrior with a dark past circulating around the mysterious death of her husband, which is gradually unravelled as the series progresses.

Burn Up Excess gets loaded ^_^

For one thing, I think the animation itself is great, but tends to repeat itself in other episodes, but I simply let that slide. The plot, although not the most clever or original is quite well-conceived, and you will need to watch each episode very carefully to see what's going on, but it all makes sense in the end. Oh, and as for the dubbing, I really loved it, although some of the characters can tend to go overboard sometimes, all the characters sound just the way they should.

As for the comedy (Yes, this is a comedy if you missed it), all the jokes are hilarious and some of the things Yuji does made me cry out in laughter. Although not as slapstick as Excel Saga (But then again, what is?), everything is just done in such a way that you may want to rewind and see them over and over again!

Overall, I think Burn-Up Excess is definitely one for the guys or people with a warped sence of humour - it develops itself into something truly unforgettable. And if you stick around till the ending of the final episode, I'll just say this: You will LOVE it!

9
Girls with Guns never looked so cool! If you love action/comedy anime, give this a try! You won't be dissapointed!
LATEST REVIEWS