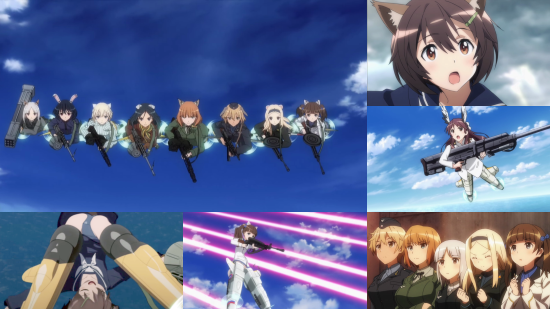 The war on pants continues.

There is only one problem - no one in the 502nd actually knows the truth about what happened in Gallia; how the unique mix of abilities and strength of the 501st managed to break through the Hive and destroy the core, and the sacrifices made. However, all this aside, it doesn’t stop those in command from making a damn good show of it, and to begin with, they send forth for a special witch, whose accuracy and strength are famous and unparalleled in the world of combat witchery: Takami Karibuchi.

The Karibuchi family has more than one witch in its ranks. Takami’s younger sister, Hikari, is also endowed with the gift of magic, though due to her age and experience, she lacks the might and discipline of her sister to the point that she gets repeatedly soaked every time they meet. The truth is that Hikari is a bit of a failure, magic-wise. She lacks focus, has terrible aim, and in all fairness, to begin with she isn’t cut out to be one of the warrior witches. However, following a competition at witching school (think Hogwarts, but with less pants), Hikari uses her limited abilities to rescue a school friend and becomes a contender for support duty in Europe. All this to be with her beloved sister as she returns to the front lines to aid the 502nd in their new campaign. Oh, and did I mention that they are both Fusou witches? Not that the franchise could be considered as being a little bit biased.

Through a series of co-incidental events on the sister’s transit across the Arctic to the Baltic States, they encounter a swarm of Neuroi from a new hive. Lives are lost, and the end result is that the inexperienced, undisciplined cutie becomes the new face in the 502nd. So, Hikari’s adventure begins.

Like Yoshika’s arrival with the Strike Witches years earlier, Hikari’s arrival doesn’t go quite as smoothly as she would have hoped. Her lack of skill puts her at a disadvantage and this irritates her comrades as, and rightly so, they don’t want to be responsible for the death of a witch who doesn’t know what she is doing. This attitude and hostility is immediately made clear through the vocal actions of the miniature Naoe Kanno who takes a quick dislike to Hikari. Hikari simply wants to do her best with her usual enthusiasm, but this doesn’t seem to be enough yet.

Back at home Hikari was a runner. Every morning she runs to see her father at the radar station, she runs to school, she runs to the sea. She is a fit little thing. And this fitness is her key to her potential future success with the 502nd. Failing some of her initial tests with respect to aim or control of her striker unit, it is obvious that she can’t focus her magic correctly and this is reinforced when she face plants the ground while flying her sister’s striker unit. Due to her inexperience and lack of control, Hikari faces expulsion from the 502nd. She has to get better, and thankfully, she manages to achieve some form of skill and use, while gaining the trust of the Brave Witches, without the use of a montage.

So far, Brave Witches seems to be following a bit of a similar plot to the first series of Strike Witches. Hikari is this series’ Yoshika, although it has to be said, she is quite a bit cuter and so far actually more likeable. I am as yet undecided about the rest of the 502nd. Most tropes are covered with a Brave Witch for almost everyone’s tastes. If you like your shy and cute characters, then Georgette will satisfy that urge, especially with her healing magic that can warm you up. Gundula Rall is the strong leader of the wing and has a strict personality, but is also caring, and a chest that puts Charlotte from Strike Witches to shame. Their instructor, Edytha Rossman is a cold genius, able to turn any inexperienced witch into a warrior. Waltrud Krupinski is... I don’t even know what she is.

So far though, I have found myself drawn to Nikka Katajainen and Sadako Shimohara. I won’t give the entire game away as to what has drawn me to them above all of the other girls, needless to say its personality. For some reason, I am getting the same vibes I had from Perrine and Lynette from Strike Witches.

What I have noticed in the few episodes I have seen is that Brave Witches is so far more serious in its stories and there is less of the “hunt the panties” fan service so far which dominated Strike Witches. If I played the now-infamous drinking game here I think I might stay sober. However the CGI and the animation quality has markedly improved and has gotten more fluid, especially in the flight and fighting scenes, though these scenes are still dominated by rear camera shots for obvious reasons.

Brave Witches is one of the few shows I am keeping up with this season, and brings the same smile that I gained when watching Strike Witches. It is a worthy third series of the franchise, and won’t leave you disappointed. If you loved Strike Witches, then it’s time to dive into the world of the Brave Witches too.

You can currently watch Brave Witches in streaming form on Crunchyroll.

8
Fans of Strike Witches will love the Brave Witches spin-off.