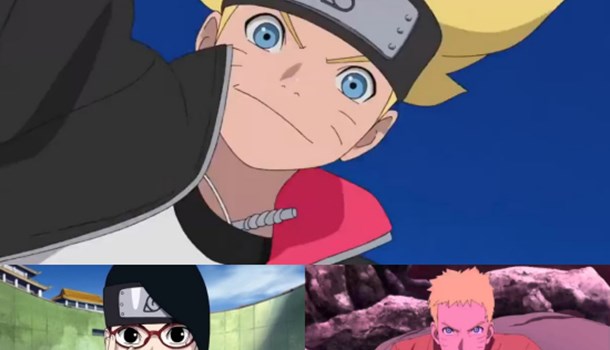 You thought Naruto was done and dusted, didn't you? Understandable, given that its original manga finished, and the whole thing came to a conclusion with a bang in terms of the theatrical feature that was The Last: Naruto the Movie. Except that wasn't the last, because Naruto now has a son - and would you believe it, he's quite the troublesome young ninja! It's almost like the entire story is starting over again...

The son in question is named Boruto (let's get this out of the way right now - yes, it is a very silly name), and he certainly lives in a very different era to his father, as you might expect. The Hidden Leaf Village is now packed to the rafters with modern technology - televisions, video games and so forth, all of which makes the land look decidedly prosperous under the stewardship of the current Hokage, a man who you might have heard of named Naruto.

Of course, with the role of Hokage comes a huge amount of responsibility, and thus Naruto is quite the errant father - never around to see his family and always burying his head in paperwork rather than taking care of his parental responsibilities. This all comes to a head when he fails to even make it home to a family birthday party, instead sending one of his shadow clones in his stead - a sneaky ruse that goes bad when said clone disappears in a puff of smoke while also managing to drop the birthday cake in the process.

All of this leaves Boruto desperate to seek the attention of his father, and this opportunity comes to him via the latest Chuunin Exam - although initially reluctant to take part, an opportunity to show his Dad his worth presents itself in the form of some training from Sasuke, leaving him convinced that he can make his mark. Of course, becoming a great ninja isn't an easy task and Boruto is quickly discouraged by his lack of progress - a problem which leaves him open to the lure of science, and the promise of a gadget (A Certain Scientific Rasengan, you might say) that will let him wield any powers he desires with zero effort or practice requires.

Thanks to this we have our theme for the film - the value of achievements earned by hard work and effort rather than shortcuts and cheating - which also sets up the story of Boruto's dissatisfaction with his father nicely and ensures that our leading man (well, boy) has a little more to his personality than simply serving as a re-tread of Naruto. The same can be said for the rest of the cast of youngsters, all of whom are the offspring of prominent characters from the original series - we won't spoil those family trees too much, as their discovery is one of the fun things about the film all the way through to its post-credits sequence.

Beyond its stack of new cast members, this is very much a Shonen Jump movie in its format - it starts with a bang and ends with an even bigger one thanks to some spectacular action scenes, leaving the rest of the film to explore its narrative and core ideas with a sprinkling of additional action into the bargain. It's a formula that works well as long as it has good characters and a decent scenario to work with, and thankfully both of those elements are present here; the only real missing link is the rather woolly one between the film's villains and goings-on in Hidden Leaf Village, which the movie seems to have little interest in tying together in deference to getting to "the good bits" instead of fleshing things out there.

As someone who has no grounding in Naruto Shippuden beyond a few of its previous movie outings, I wasn't sure what to expect of Boruto, but thankfully my lack of knowledge of the intricacies of Naruto itself proved to be no problem here - there were definitely some references and moments that I missed out on (judging by the squeals of delight from the audience of this screening that passed me by), but they were few and far between and I recognised all of the core cast without issue.

Provided you have at least that basic knowledge of the world and cast, Boruto: Naruto the Movie is a near-perfect blend of that Shonen Jump formula with pure fan service - getting to see the original cast as grown-ups and parents is a lot of fun, and they still get to kick ass come the end of the film without being forced to defer to the kids, who themselves get just enough time to shine and provide another layer of enjoyment to the movie. In that regard this film is actually quite a surprise - I was expecting either nothing but deference to the original cast or nothing but the new kids on the block showing the "oldies" how it's done, so the careful blending and restraint on show here is commendable.

Also commendable is the complete lack of restraint on show for the film's action scenes, all of which are completely nuts - huge explosions and rapid-fire sword and martial arts fights that are animated at blistering place filled with smears and utter on-screen chaos. It's the franchise at its best, and you can't help but feel your heart pounding with childish glee as everything gets blown to smithereens before your eyes.

The biggest compliment that I can pay Boruto is that it helped me to recall my dim and distant past when I watched and loved Naruto in its early days - the great, fun characters, the on-point action and the simple but enjoyable stories. This film has all of that, but with an added layer of nostalgia (because yes, Naruto as a franchise is old enough to generate nostalgia now) from seeing those old friends return as older, wiser but equally strong characters compared to their new charges.

In other words, if you're a Naruto fan of any stripe - a die-hard who has read all of the manga and still watches the anime every week, or a lapsed viewer who checked out of the show years ago - there is plenty for you here. All of this is delivered in that typically slick Shonen Jump package of colourful and occasionally spectacular visuals, strong voice performances and a story that just about holds together as long as you don't think about it too much. Whether we've just seen the moment that a new generation of this franchise is kicked into life is another question, but no matter what comes next Boruto: Naruto the Movie is perhaps the most enjoyable slice of said franchise we've watched in quite some time.

Boruto: Naruto the Movie was screened in Glasgow and Edinburgh as part of Scotland Loves Anime 2015. It will be released theatrically across the UK form November 10th 2015 by Manga Entertainment, with a home video release to follow.

8
Naruto fans new and old can enjoy this new generation's first outing, as it gets everything that you'd expect from the Shonen Jump formula almost exactly right.
LATEST REVIEWS