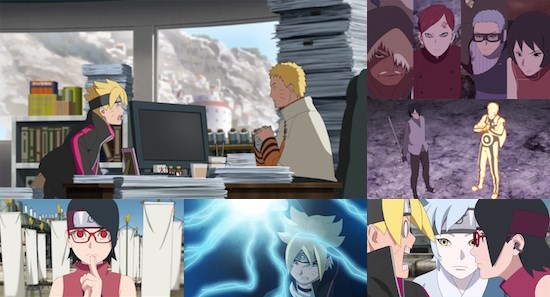 Here at UK Anime Network we first got to see Boruto: Naruto the Movie a couple of years ago at Scotland Loves Anime 2015. After that premiere there followed a slightly wider (though still somewhat limited) theatrical run, thanks to Manga Entertainment’s newly discovered penchant for theatrical releases. Now, almost two years down the line, comes the physical release, just in time to ride on the coattails of one of this season’s new streaming series Boruto: Naruto Next Generations.

Boruto is the progeny of Naruto and Hinata who, as I am sure you will recall, got married and had a couple of kids at the end of The Last. Boruto and his younger sister Himawari are the spitting images of their parents as youngsters and seem to share more than a little of their personality traits too, at least at first glance. They are not the only things that will seem familiar to long-time Naruto fans; a great many old faces make an appearance in this film, even if only briefly. Furthermore almost all of the new characters introduced here are surprisingly similar to their eminently familiar forebears, in much the same way as Boruto and Himawari. So, what we have here are a bunch of very familiar characters, where even the new faces have a distinctly familiar feel. This is just more Naruto then, isn’t it? Well, yes and no.

All this familiarity should not worry newcomers. Although Boruto: Naruto the Movie does tie heavily into the existing Naruto universe, and long established characters, it still admirably manages to stand on it’s own, despite all the baggage. Though make no mistake, this is a film which panders heavily to long term fans. That you can quite happily watch and enjoy it without any prior knowledge of the Naruto-verse is no small feat. This is achieved via the film having several layers of depth; the more you know of Naruto the deeper you can penetrate and the more you will get out of the viewing experience. The flow of the film and introduction of characters is such that the intricate ties to the past just aren’t something you need to worry about, it still manages to stand on it’s own without that background. Therefore, for the first time in a long while, Naruto is accessible to newcomers. It is actually a very tricky thing they have pulled off here, managing to include enough references to the past to maintain the interest of Naruto veterans, while at the same time keeping the story svelte enough that newcomers don’t need that grounding to engage with and enjoy the movie. That brings us to the only real complaint we can find with the film: that the plot is a little trite and lightweight, though this is a shōnen movie so that’s par for the course, and this movie is really all about the action.

With that in mind, the film begins with a bang as the two bad guys are introduced in spectacular style, along with the return of an old favourite from the Naruto series. Viewers familiar with Naruto lore will instantly cotton onto their provenance and the world-ending threat the new pair pose, but this is one of those things that you don’t need to know to enjoy the film - they are sufficiently well established as typical shōnen "bad guys doing bad things" that it doesn’t matter much what their origins may be.

It’s not long before we’re back in the leaf village, and this is a very different time in Konoha. Naruto is now Hokage (the village’s leader) and is overseeing a period of great prosperity. The world is at peace and has been for some time, so Naruto finds his days overflowing with the mundanity of administration. Things have moved on apace, science and technology are racing into every aspect of the previously very traditional ninja world and the village has expanded almost beyond recognition.

Naturally the titular Boruto is the focus of the vast majority of the film’s runtime. As the film begins he is struggling with his father’s role as Hokage, in particular the paternal absenteeism that results from focusing on such a busy and important role. Boruto is crying out for the attention of his father and is especially upset on behalf of his little sister Himawari, whose birthday celebrations are somewhat scuppered by Naruto's abject failure to juggle his role as Hokage with his family commitments.

Boruto eventually concludes that the way to grab his father’s attention is by performing well in the upcoming chūnin exams, which pits ninja from across the land against each other in combat, and where the ultimate prize is to take a step up in the ninja hierarchy from genin to chūnin. Boruto decides that becoming the student of Naruto’s long time friend and rival Sasuke Uchiha may even provide a way to surpass his father, and thus he sets about achieving his goals under the tutelage of Sasuke.

However, while Naruto was nothing if not persistent as a youth Boruto is used to things coming a little easier, and is quickly discouraged. In steps one of the village’s scientists with what seems like an easy answer, though predictably the shortcut to success doesn’t quite deliver on it’s promise. This theme of seemingly easy answers, and the consequences of taking that easy path, runs throughout this movie. Just as the consequences of his actions are beginning to bite the bad guys make their move and the action takes a massive jump in scale: from novice progression competition, to ninja legends fighting for survival. The big guns come out in spectacular fashion, and stay out for most of the rest of the film. Long term fans will get a real kick from seeing a mature Naruto and Sasuke going all out, at the same time the awe-inspiring action sequences provide a visual treat that anyone can enjoy.

Boruto: Naruto the Movie provides something for everyone; whether you’re a long time Naruto fan, a lapsed former fan or a complete newcomer there is plenty to keep you entertained here. Okay, so it’s not the deepest of plots but it was never going to be. However, the action is spectacular, the film is a great deal of fun and it will keep you entertained for the entire 95 minute runtime, that really is everything you could ask of a shōnen movie.

Also contained within the Blu-ray release is the special The Day Naruto Became Hokage, which is an amusing short covering (unsurprisingly) the day Naruto becomes Hokage. In a world where such things are often not seen on these shores, or even given extortionate separate releases (I’m looking at you Girls und Panzer OVA Collection), it is a very welcome little bonus feature, though some will undoubtedly complain that the feature is dub only.

8
The distillation of everything that made Naruto entertaining into a bite-sized chunk of pure shonen joy, which manages the Herculean task of proving enjoyable to newcomers and veterans alike.
LATEST REVIEWS