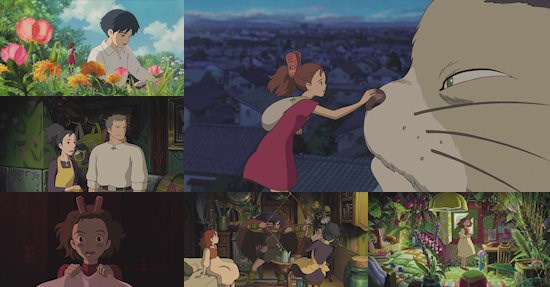 Although we're still a little way off a physical western release of Studio Ghibli's latest film, the presence of a Japanese Blu-Ray release complete with English subtitles and the advent of a number of early UK screenings of the film means that thankfully we don't have to wait for any kind of full theatrical or DVD release of the movie to cast our eyes over it.

This latest outing from the animation studio which should require no introduction will have particular resonance with British viewers no doubt, on account of the fact that its basis is the well-known book by English author Mary Norton, The Borrowers.  Thankfully, the core concept of said novel is kept intact, simply shifting the film's setting to Tokyo instead of England and changing a couple of names in line with that change of setting.

That geographical movement Aside, Karigurashi no Arrietty (to use its Japanese title) tells the story of a sickly boy awaiting surgery named Sho, who is sent to stay with his aunt until his operation, sending him back to the house where his mother lived as a child.  On his arrival, it takes him no time at all to spot a tiny person trying to hide herself away in the undergrowth - the Arrietty of the film's title, and one of a family of three so-called "Borrowers" who live within the house and quietly take what they need from the home's human occupants as required.

After that fleeting glimpse of Arrietty upon his arrival, Sho soon gets another opportunity to spy her as she embarks upon her first foray into "borrowing" under her father's guidance, catching both of them unawares as he lies in his bed.  Although Sho means no harm as he tries to further his interactions with Arrietty in particular, her parents see themselves left with no option but to leave their home out of concern for being spotted by a "human bean" (to use the Borrowers own parlance), and their concerns only prove to be justified as the property's housekeeper begins to take an unhealthy interest in the "little people" of which she's heard so much from Sho's aunt.

This almost goes without saying for a Studio Ghibli film, but the first thing to strike you about Karigurashi no Arrietty is its beautiful attention to detail - something which comes into its own when it involves depicting the world of tiny people living in a normal human home.  In fact, the first twenty minutes or so of the movie in particular are just plain delightful as we watch Arrietty and her father exploring a human home via ingenious methods (staples as steps, fly paper to climb steep surfaces and so on), marvelling at their larger than life surroundings as they go.  This wonderful obsession with detail isn't simply limited to the sumptuous animation however, as even the film's audio is a loving attempt at putting you into the Borrowers shoes - whenever we follow them directly, noises are amplified so that the humming of a refrigerator becomes more noticeable while the ticking of a clock dominates a room.

Alongside the audio-visual wonders (and we can't ignore Cécile Corbel gorgeous soundtrack in those terms either), Karigurashi no Arrietty runs its story as a very tight ship indeed, wasting no time in introducing Sho and Arrietty to one another while keeping a keen focus on this Borrower family as they find themselves faced with the decision to up and leave their home.  Although this tightness of focus is admirable in many ways, and certainly keeps the movie lean and straightforward, it does remove a lot of the fun of The Borrowers as a story - we never really get much time to marvel at their every-day life as a tiny family in a huge world, or admire their use of human objects as they go about their business, which is a real shame given the aptitude that Ghibli have shown in animating and depicting that world in the first place.

This inability to break out and have some fun adds an air of almost stuffy seriousness to the whole affair that could have been broken up by a few more elongated scenes of normality before the pressures of having been spotted set in - perhaps this is simply a result of being British and of a certain age where I got to enjoy the quirky BBC television series based on the books, which of course was afforded much more time to be frivolous due to its very nature.  Regardless, for such an entertaining concept, Karigurashi no Arrietty arguably takes itself far too seriously with its outlook.

That said, we can't really deny that this is a great film to watch on numerous counts - we can't sing the praises of its animation and production quality enough, and its soundtrack is suitably wonderful to match.  This creates a slick wrapping for a heart-warming and occasionally touching story that proves to be a solid effort that accomplishes everything which it sets out to.  Our only real wish was that it had set out to relax and have a bit more fun with a concept that is built to entertain and amuse in the first place.

The Japanese Blu-Ray release of Arrietty features Japanese, French and Korean DTS 5.1 channel audio and Japanese PCM stereo, together with English, Japanese, French, Cantonese, Mandarin and Korean subtitles.  Extras on the Blu-Ray consist of storyboards, scripts, interviews with Hayao Miyazaki and Hiromasa Yonebayashi, a TV special feature on the movie, a music video of the film's themes song and trailers - all extras are in Japanese only.

7
Another great Ghibli work which is beautiful to watch, but a film that is prevented from being a true classic on account of its staid delivery.
LATEST REVIEWS