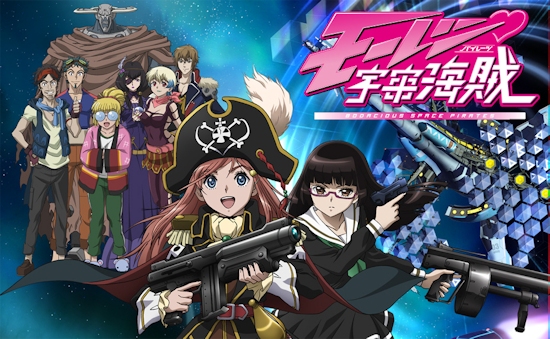 Only in anime would you have the combination of young intelligent girls, space ships, pirates and mini-skirts, and although the word “bodacious” has not been in the lexicon of normal humans since the days of “Bill and Ted's Excellent Adventure” I have found that no other word would better describe what this series is.

Bodacious Space Pirates is the latest of last year's streaming series to join us in physical form in the UK. Here at UK Anime, we covered the first few episodes of the series in our winter 2012 streaming review line-up and the show was very well received, if found to be a little slow at times due to the first few episodes being mostly for the purpose of character and universe building.

However, now that we have the first half of the series in shiny DVD format, I think we can revisit our previous words and really dive into what makes this series about space pirates truly bodacious. Hint: it's more than just the short skirts...

The list of things that Marika Kato didn't know about her family would fill an entire volume of an encyclopaedia. She didn't know that her mother had a secret stash of high output blaster cannons in her garage and spent her youth, before giving birth to Marika, blasting holes in luxury space liners under the name of “Blaster” Ririka Kato. Marika didn't know that her father, whom she hadn't seen for a very long time, was in fact the captain of the pirate space ship Bentenmaru. When strange things started happening in her life, and with new faces following her, she didn't know that the hereditary ownership of both this vessel and its pirate title now belonged to her.

The choice for Marika is not an easy one. Does she remain a class-topping high school student with an active role in her school's (space) yachting club? Does she stay in her part-time job at a charming little cafe whose speciality is chocolate parfait? Or does she instead don her space wings, gain the ultimate freedom and become the captain of her own vessel to make a mark of her own on the universe?

One of the main character traits which Marika and her family share is their ability to, in a split second, weigh up all the possibilities and come up with a decisive, firm strategy. An excellent trait for a leader to have. But, she is still a high school girl, and leaving what you love is not exactly easy... why give something up if you don't have to? In the end Marika decides to stick with school, while gallivanting around the galaxy, stirring up trouble and scaring holidaymakers.

What wasn't evident in our first visit to the universe of Bodacious Space Pirates back in early 2012 is that there is a lot more to being a ruthless pirate than boarding ships and going pew-pew-pew. The pirates gained their letter of marque so that they could defend their home, the Sea of the Morningstar orbiting Tau Ceti, from the invading forces of the Galactic Empire. Even in peace time, the pirates still exist and they stand as an independent force from the official authorities who are able to answer the call, for a price, to help those in need. So when Marika gets an impromptu visit by an old friend of her father's to save the Serenity solar system, she simply can't help but get involved and assist in solving their troubles... with the help of her friends of course.

Her friends in the yachting club are a rather special bunch too, though all of them are quite sweet - when you consider that the school is female only, there is a very wide spectrum of personalities.

Bodacious Space Pirates is an extremely well animated and quite gripping series once it gets going, with a lot of potential as the universe within which it is set opens up more and more. As space fiction goes, the series tends to actually follow many of the laws of physics while bending only a few to make the narrative easier (everyone needs faster-than-light space travel and communications...). The series, when streamed online, was presented in High Definition format which looked simply stunning. Although there is a Blu-Ray master for this series with the US and Australian versions making use of it, there is, as of writing, no plans for the Blu-Ray version to visit our shores. The DVD version is based on the US masters, with some evidence of speeding up being applied in the conversion process to account for the frame rate difference. The only time this conversion is noticeable is during the opening and closing credits where the music is actually pitch changed by an 1/8th and is only noticeable if you listen to the original opening music on a regular basis. (I do, I'm sorry, but I really like it!!)

The English dub, although quite enjoyable, unfortunately strikes a nerve with me. To begin with, the voices and mannerisms are based on the stereotypical American high school girl with the over-use of the word “totally” in every other sentence. At the same time, the cast decided to maintain the Japanese honorifics (-san, -chan, -sama) when addressing each other. Now, forgive me for being so blunt, but if you are going to translate from one language to another, then surely these features of the source language are lost? I normally don't complain about this kind of thing, but I do believe that the flow of the dialogue in Bodacious Space Pirates is disrupted because of the inclusion of these honorifics and it was a poor decision to maintain them in my opinion.  If you have an opinion on this issue, please let us know what you think in the comments section below!

These minor issues aside, Bodacious Space Pirates is a very fun series which delivers hardcore space pirate action with a side order of fan service and doesn't take itself too seriously. The characters are very likable and well defined and if you walk away at the end of thirteen episodes without a smile on your face, then you must be descended from a rock. In my opinion, this series is a must buy.

8
Space pirates in mini-skirts. It's like Star Trek The Original Series all over again!
COMMENT AND DISCUSS
blog comments powered by Disqus