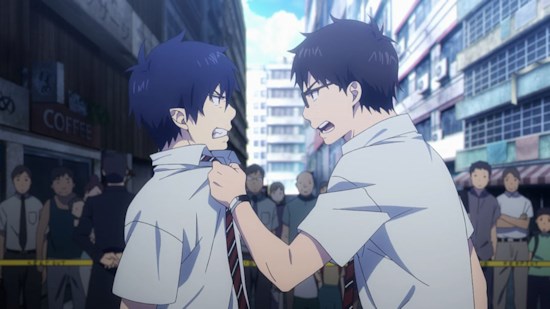 *This review will contain spoilers for part one of The Kyoto Saga.*

The Impure King has risen, our hero Rin is locked up awaiting his execution, Ryuji's father has been badly injured and Yukio still spends lots of screen time being a prat. We are back in Blue Exorcist land folks for the wrap up of this belated sort-of second series. With part one being a fun and mostly engaging return to this world can part two stick the landing?

After the more measured first part of the story that took its time building up the new characters and tensions that exist in the Kyoto branch of True Cross as well as establishing a new big bad for the run, part two kind of carries on like that of the first few episodes. Thankfully it then slams its foot down on the accelerator and we are flung into an all out war against the impure king and evil exorcist Saburota Todo. This gives the show a serious bolt of energy as we get threat and tension and lots of great action. It never quiet hits the highs that the original series managed at its best but it's a great ride with a satisfying ending that, of course, leaves the door open for more.

The fighting never takes over the series however as the cast stay front and centre with virtually all of the original characters getting mini arcs or moments to shine and get some further characterisation; it's a well handled balance of writing and pacing that a lot of other shonen shows fall short on. The increasingly unhinged Todo seems to be developing a serious interest in Yukio, one that leads the normally unflappable Okumura brother into some awkward self reflection. Concurrently, we have the rest of the cast gathering to hold off the deadly miasma the impure king is intent on spreading. Rin and Ryuji take the king on directly each having something to prove while re-establishing their previous bond, and their classmates Konekomaru and Renzo battle their own fears and shortcomings. The only bum note belongs to (sigh) Shiemi who not only gets the least interesting sub plot but the most poorly written of the bunch, although she does finally get a scene with Rin that almost justifies her part in the show.

The action itself is well handled with the highlights being Rin's big moments in episode 11 and the four or so episode-long battle (Wait when did this turn into Dragonball? - Ed) between Yukio and Todo proving at times the most interesting of the many fights taking place. A-1 pictures continue the stellar animation job they did in part one, nailing the scale and disgusting design of the impure king as well as the unique looks of a very large cast, all of which looks great on Manga's blu ray release.

Although I was satisfied overall with what I got there were a few problems I had upon re-watch – Mrs J Findlay and I binged the original anime and the first part of this arc ahead of receipt of the discs for this – that weren't fatal but deserve a little unpacking. The pacing of the series overall feels a little off with things taking maybe an episode too long to really get going. Despite being a suitably imposing looking critter the impure king is essentially a giant plot device to forward Rin's control of his powers: he is also not a very engaging villain being a silent but deadly blob. The other issue, as mentioned in my part one review, is the release schedule of this series – this should have been a complete series release. The show flows much better being able to watch it all the way through instead of months between halves.

Taken as a whole this is an easy series to recommend to both Blue Exorcist and action fans. It delivers a interesting story and some fantastic fights, wrapped up in decent character work and mostly strong writing.