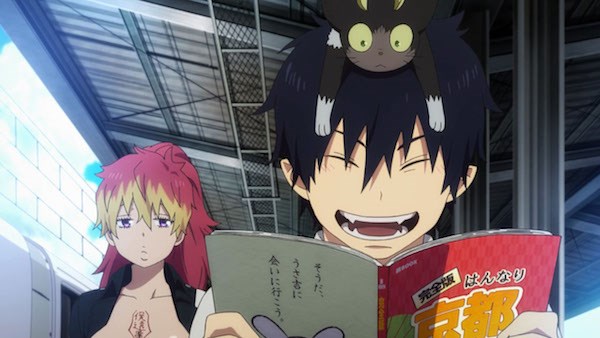 Before our regularly scheduled programming begins, a small anecdote: Mrs J Findlay, having shown a mild disinterest in my reviews for UK Anime Network (being only a casual anime fan, despite my best efforts), was legitimately excited when I told her that I would be getting my hands on the new series of Blue Exorcist, ahead of its official UK release. To the point of threatening divorce if I started watching without her. So when the discs arrived and we sat down to dive back into this world she loved we found out the two disks we had were not the whole 12 episode series, but only the first six - or as Mrs J Findlay said: “Well that sucks”.

Wannabe exorcist Rin Okumura is not having the best of times. He's just had his big secret exposed to his fellow exorcists in training, that he is the son of Satan. To say they haven't taken the news well is somewhat of an understatement, as nearly all of them are now terrified of him and more than happy to let him know about it. Often this takes the form of pointing out how much suffering Rin's father has caused each of them. This point is however quickly superseded when the left eye of the Impure King (a very ancient, very evil being) is stolen from True Cross Academy. Rin and his classmates are despatched to the Kyoto branch of True Cross to assist in the protection of the right eye. Adding to all of this Rin is also trying to learn to better control his powers under the watchful eye of Shura Kirigakure, and if he fails he will be executed!

As you can probably tell from the above synopsis there is a lot to unpack in this brief run. Fans of the original 2011 series will also be wondering why all of Rin's classmates are suddenly scared of him again… Well, that series followed the original story up to episode 17 of its run, everything after that is anime only content. What we are presented with in Blue Exorcist: Kyoto Saga Volume 1 are the events which followed Rin's exposure in the manga. So with that in mind how does this first half of the series hold up? I'm pleased to say very well.

The show tosses us right back into the story, with no recap or refresher anyone who hasn't watched it for a while. Really a quick reminder of what this world is like and what was happening at this point would help massively. As things stand it isn’t too bad, as the writers mange to re-introduce everyone smoothly enough, though new viewers will most definitely be lost. The pace here is very deliberate as these six episodes function to introduce a raft of new characters, many of whom are related to the existing cast, as well as develop the regulars and setting up the main threat for this run. There is a lot of table setting and getting ducks in a row contained in these episodes, most of which is interesting enough, but the pace can waver at times, resulting in episodes dragging somewhat in places. The writers overall do a good job with the various threads they have to juggle, but the lack of action in these episodes proves detrimental to the story.

Fortunately Blue Exorcist has a very fun, quirky, cast and just watching them interact can be a joy in and of itself. I don't think they quite got the balance right here however, as Rin spends most of the runtime alienated and staring angrily at candles, as he tries to hone his abilities. He is however a decent, likeable, shōnen hero and his determination to still be friends with his classmates, despite their fear and anger towards him, is an endearing story arc. The supporting cast have occupied an odd place so far in the story. Their attitude towards Rin, although understandable, does make them seem unreasonable. Especially as he’s never done anything to make them doubt his loyalty or character. The only real bum note is female lead Shiemi, who is as drippy and useless as she was in the original show. Although she is not quite as annoying here, given her place in a small sub-plot that keeps her and Rin apart. Rin's twin brother Yukio also straddles the line of tolerability, with his cold and controlled nature being very much at the forefront and coming off like a bit of a git most of the time.

The animation of the show is deftly handled by the returning A-1 Pictures, with the aesthetic matching the prior series seamlessly and looking crisp and clean on Blu-ray, which I would suggest to be the best way to view the show.

Now, to return briefly to the story that started this review. As stated this review covers only the first six episodes of this series, across two discs, with part two to follow at the end of May. Along with Mrs J Findlay I was less than happy to find out about this, given the shows short length and the price tag of each volume. This feels like a regression of the industry and one that, sadly, looks like it may continue (the upcoming Occultic Nine is also a 12 episode series, that will follow this example). It’s worth mentioning this isn't a dig at Manga entertainment, as the US release was the same and no doubt they had this release pattern stipulated to them when they licensed the show. However, it still sucks!

7
Blue Exorcist is back and well worth a look for its fun characters and engaging, if slightly plodding, story.
LATEST REVIEWS