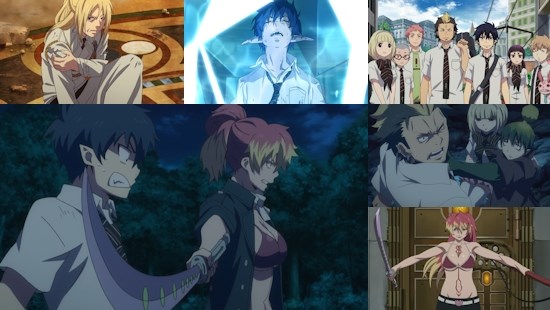 The first half of Blue Exorcist's Definitive Edition for the UK took this successful shounen property, gave it a High Definition treatment, and added a pretty decent English language dub to allow it to live up to its name - a decent package when paired with a serving of enjoyable episodes that do a good job of bringing the original manga's source material to life.

Literally speaking, this second half of the series in Definitive Edition form provides more of the same - the remaining episodes and short extras in HD on Blu-Ray, spread across three discs and complete with that English dub. Where things aren't quite equal is in terms of the quality of the episodes themselves, with the show veering away from the original manga to weave its own story so that it can bring things to a conclusion; not necessarily a bad thing in itself - nobody likes to be left hanging from a cliff with no obvious resolution - but the way it's carried out simply isn't as entertaining as everything that had come before.

For a more in-depth sense of my thoughts on the second half of Blue Exorcist you'd be well served to check out my review of its original UK DVD release, but in short you could argue that the show's original material tries too hard to impress, implementing some seismic shifts in the narrative that move too quickly and do too much. This leaves the whole thing feeling rather forced and unnatural - for anyone who has been reading the original manga, the shift in plot and pacing will feel both disappointing and jarring, and even for those new to the franchise the seams between the source material and anime original content will surely show through markedly.

This is a real shame, as up to the point in diverges from the manga Blue Exorcist remains incredibly entertaining, building upon the introduction of Shura Kirigakure and the issues surrounding Rin as a camping trip-cum-exam gone bad brings things to a head. This isn't to say that the remainder of the series from this point onwards is a complete disaster - it has its moments and still does all of the right things to appeal to fans of shounen series - but it certainly doesn't live up to the expectations set by earlier episodes.

Visually, this second Definitive Edition release is the kind of upgrade you'd expect moving from DVD to Blu-Ray - there are a few scenes that look as if they weren't animated in High Definition in the first place, but as a whole the series looks good and benefits from the increased resolution and lack of NTSC to PAL conversion issues inherent in DVD releases. This alone may not persuaded existing owners of the show on DVD to switch formats, but for newcomers it's certainly the better of the two releases.

Of course, the other potential reason to upgrade is the show's English dub, which continues to be well cast and of a decent quality overall. There are still a few odd pronunciations, but the English cast pull off everything required of them to make the series eminently watchable if you want to be rid of those pesky (but thankfully entirely accurate and correct) subtitles.

There can be little doubt, then, that this Definitive Edition of Blue Exorcist lives up to its name - everything you could ask for is provided by it in a simple but flawless package, making it a definite item of interest for new fans of the series and worthy of at least contemplation by those already in possession of the previous DVD release. It's a shame that the quality of the second half of the series itself doesn't live up to the promise of the first, but such are the difficulties of shounen anime adaptations. Still, perhaps this Blu-Ray release will pave the way towards us seeing the stunning visuals of Blue Exorcist's theatrical movie outing in High Definition at some point in the future?

Japanese and English stereo audio with English subtitles.  Extras consist of a series of comedy "Ura-Ex" skits, web previews for the series and textless opening and ending credits.

6
A quality release befitting of its name, albeit one with actual content that doesn't quite match those lofty ideals. Still worthy of consideration for Blue Exorcist fans, however.
LATEST REVIEWS