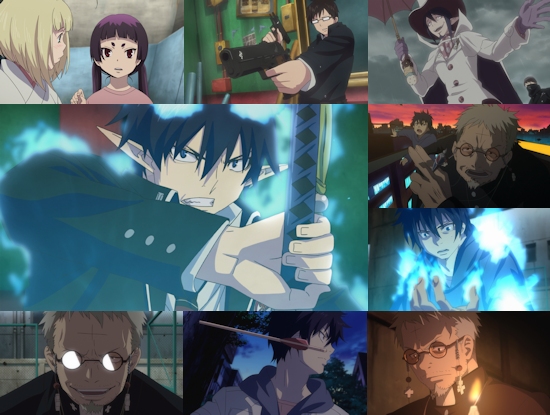 If proof were ever needed that time is flying by at an alarming rate, would you believe it's been an entire year since the first volume of Blue Exorcist came to the UK on DVD? In the period since the series was licensed over here by Manga Entertainment, it's been a bit of a rollercoaster thanks to the announcement of an English dub going into production just after plans had been confirmed for a subtitle-only UK release, before this year saw an announcement that Aniplex USA would be re-releasing the show in North America as a pair of expensive DVD and Blu-Ray combo pack collections.

Not one to be outdone, we're now getting the Blu-Ray part of that release here in the UK, stripped of any fancy packaging and physical goodies but at a far more tempting price point - most importantly perhaps, this is also the first UK release to feature the English dub of the series; a welcome edition, even if it does leave DVD buyers who want that dub out in the cold.

Given that we've already covered the content of this series in terms of the quality of the show, I'd suggest you check out our review of the original DVD release's first volume to get a feel for the plot and quality of story-telling on show here, but as a very quick single sentence recap for the completely uninitiated: Blue Exorcist is the story of two brothers, Rin and Yukio Okumura, the former of which learns that he is the son of Satan, which leads him down the path of becoming an exorcist so that he can wreak revenge upon the father he's never met.

The first thing to note with this first Definitive Edition release is for those still seeking to watch the series with its original Japanese audio - while the original UK DVD release suffered from a number of missing subtitles this Blu-Ray edition exhibits no such problems, providing a virtually flawless set of subtitles that are also far easier on the eye simply thanks to the superior subtitle display capabilities of the format. Given how frustrated we tend to be about subtitle issues here, it's always nice to see such problems fixed the second time around.

If you're looking to watch the show in its dubbed English form, the quality of said dub is actually pretty strong - most of the main characters have been cast well, and only Yukio's voice actor Johnny Yong Bosch seems to struggle with their character as he fails to hit either his quiet and bookish tendencies or his ability to be something of a badass when required of him. This is a bit of a shame as it reduces the effectiveness of the interplay between Rin and Yukio at times, although thankfully it never undermines it entirely and the scripting and voice work for the dub is enjoyable for the most part.

The only gripe was could raise about the dub is that some of its pronunciations are a little off and decidedly variable to boot - Okumura in particular gets mangled in a multitude of ways, to the point where the inconsistency is a bigger issue than the pronunciation.

Still, in general terms these complaints are pretty minor, and the fact that we didn't run out of the room clawing at our ears at any stage suggests that if your viewing preference is with an English dub you should be able to fully enjoy the series in this format - indeed, some of these thoughts may not even occur to you without prior experience of the Japanese voice cast's take on the series.

In a more general sense, this first Blu-Ray release of Blue Exorcist (perhaps we should just call it Blu-Exorcist?) is a definite upgrade over the previous DVD release - aside from the inclusion of the English dub and the aforementioned subtitle improvements, the thirteen episodes (twelve plus the show's OVA) spread across these three discs are cleaner and crisper thanks to the move to a High Definition format. How important that is to you as a viewer, and how much the series benefits from a visual upgrade, is a more subjective and personal question, but between the language options, fixes of previous issues and the improved video quality there is no doubt that this is indeed a definitive edition of the series for fans to savour.

Overall then, this first half of Blue Exorcist is an enjoyable viewing experience in its own right as these early episodes stick tightly to the original manga's storyline, and this Blu-Ray edition offers more ways to enjoy the show thanks to that English dub as well as improving both video and subtitle quality. It might not be quite enough to tempt you to make the leap to Blu-Ray and buy the series again in isolation, but for those who didn't pick up the DVD edition of the show the first time around should definitely stick out and pick up this release.

Japanese and English stereo audio with English subtitles.  Extras consist of a bonus OVA episode, a series of comedy "Ura-Ex" skits, web previews for the series and textless opening and ending credits.

7
This entertaining start to the series is fitted out with a solid English dub and improved video and subtitle quality to live up to its Definitive Edition moniker.
COMMENT AND DISCUSS
blog comments powered by Disqus