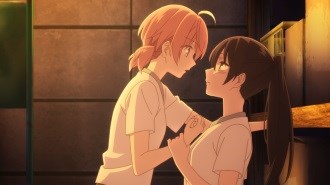 Ah, school romance. Love in the air, a school play, club activities... All the ingredients you need for a gentle romance anime. Nio Nakatani’s Bloom Into You is a little different however as it’s one of the rare yuri titles to make it to our shores. So with 13 episodes to go the race is on to see if our two young lovebirds can end up together by the time the final credits roll or if it’ll all end in tears (one way or another...)

It’s the beginning of life at a new school for tomboy Yuu. When she’s faced with the looming choice of what club to join, she’s unsure whether she should continue with the sporting clubs she favoured at her last school or try something new. She ends up being asked to help out the school council when she meets Touko Nanami, the glamorous second year student, one she observes while in the midst of being confessed to by another student. This starts the pair down a spiralling path of youthful confusion as Touko confesses that she’s fallen for Yuu, whilst Yuu herself declares that she’ll go along with things but won’t return any feelings. Along with the rest of the student council the pair must now deal with their new relationship in whatever form it will eventually take alongside the more typical school-day activities, such as student council elections, sports days and the school festival - all of which will test Yuu’s resolve to not become attached to her beautiful senpai.

It all sounds tropey as anything, but to be fair to Bloom Into You there aren’t really all that many directions for a school romance show to go in unless you decide to go for Excel Saga style randomness. As things go the show is gentle, light-hearted and does exactly what it says on the tin - it certainly works as a lighter show to ease in newcomers to anime, or even something to stick on in the background that won’t require too much attention.

What the show won’t really do though is engage you as, if we’re to be totally honest here, for all it’s attempts at teen angst the show really doesn’t have much depth to it. The characters are all a bit bland and there isn’t really much of an attempt to give any of them (outside the main couple) more than one standard character trait to define them. The stakes of the show are well and truly low and since they only adapt part of the manga meaning that there’s no real resolution to anything either.

The show is undeniably pretty to look at, which you’d expect from Studio Troyca, though it doesn’t quite live up to the visual flair and flourish of some of their other works like Re:CREATORS or Beautiful Bones which is a shame given that director Makoto Kato worked on both of those shows too. Yes, there's only so much you can do with this genre but things could definatley have been pushed a bit more. There are a few little glitches too – in one memorable instance a character's glasses completely change styles between camera angles – but all in all it doesn’t detract from the charming visuals of the show or it’s almost entirely pastel colour palette.

There’s unfortunatley little more to say about Bloom Into You. It’s a solid but very much middle of the road show which doesn’t do anything bad but also has nothing to make it stand out, unless perhaps this is your first introduction to the genre.

Frankly what's most annoying about it is that this show was licensed and not the superior Maria-sama ga Miteru, which remains totally unavailable in the UK.

But that’s a debate for another time because today we’re talking about whether or not you should pick up this show (there are after all so many unfairly unlicensed shows over here *cough*Shirobako*cough*) and the answer to that is a resounding... if you like.