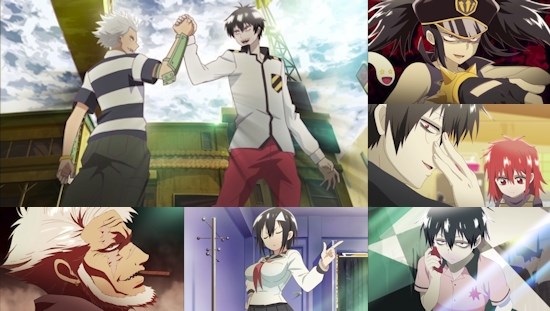 The Blood Lad manga is by now a well-established presence on our bookshelves but the anime version, released in the summer of 2013, never received an official release in the UK (although it was streamed on Viz Media’s American website). Anime Limited are keen to keep the ball rolling, though via a home video release of Blood Lad including the OVA episode that the US never got to experience during the original broadcast.

The anime version of Blood Lad is pretty much a very straight adaptation of its original manga, so everything that you experienced about the character and plot in print is exactly the same as referenced here – there isn’t much to add to previous reviews of the manga version on this site!

Something that smacks you straight away when watching the Blood Lad anime though is the incredible speed with which it's adapting that same material. Most anime series need something like a full season to cover the contents of two full volumes, but Blood Lad fires through about six volumes of material in less than the same time, with a relatively brief ten-episode run. Usually this is something that reviewers praise - we call it "lively" and "pacy" - but in Blood Lad's case its break-neck speed gives you whiplash.

This high rate acts to the detriment of multiple scenes, particularly the fights - these are supposed to become increasingly important as Blood Lad makes a transition from light otaku comedy to hot-blooded battle shonen series as the episodes progressed, but in the anime version it almost literally is a case of blink-and-you'll-miss-'em. This is most apparent in the boxing match - something that occupied two chapters in the manga has been compressed into barely a couple of minutes. This has more significance than the loss of some action eye-candy though - we can't appreciate the tactics and the turnabout of the match when its first half didn't have much of an opportunity to lay on the pain. It has an adverse effect outside of the action scenes too, because this speed also robs many scenes of their impact - revelations misfire because characters scarcely have any time to react before they're yanked off to the next scene, and we can barely process their declarations and emotions before they're cut off. I fear that the outrageously fast speed of the Blood Lad anime has been set in order to disguise its small budget and limited actual animation - you won't notice the level of detail if it all flashes past in a blur.

It's a maxim of design though that "if you can't hide it, make it a feature", and that is something that Blood Lad excels that. Even if its animation is stilted and can at times seem like a motion comic, it embraces that with striking use of sound-effects painted directly onto the screen, deliberately and eagerly sweeping across from shot to breathless shot. One of my major criticisms of the Blood Lad manga was its plain art and bland designs, but the anime version easily banishes this problem with a bright, brilliant world dripping with oversaturated colour which gives it a pop-art feel - something that the art direction is entirely conscious of, even to the point of peppering background with dot-matrices. I can reassure viewers that the comic-book effects are more vigorous, fun and enhancing like Scott Pilgrim than an old-hat Adam West Batman parody, and it’s another smart design move because they guide the brain towards accepting the low animation as we expect still panels on a page!

Environments are much more detailed and more decorated than the empty boxy rooms of the manga, and the Demon World is much more visually engaging and, oddly enough, liveable. In a subtle but entertaining callback to other horror titles, Blood Lad's episode title cards are integrated into the scenes like Highschool of the Dead's. The two shows are a world away in tone, but it nonetheless shows an interesting awareness of the wider genre. While the animation as a whole is not spectacular, they’ve known to start off at a run with an entertaining hi-octane opening sequence; and a couple of minor changes that the anime makes (of very few), elaborating slightly on Staz's backstory in the first episode, are an improving addition. The OVA episode carries on very much in the same vein as a direct follow-up of Staz and Fuyumi’s continuing adventures at end of the series instead of a side-story or comedy episode, but it does have some attractive designs for the decidedly motley band of vampire hunters who come after Staz, and their communicating by text message is entertainingly silly.

In addition to the OVA there’s a good collection of extras provided with the series to pad out its short eleven episode season. The dub out-takes are a rare sight indeed – the only times I’ve ever seen them are in Battle Vixens and the cast expressing bafflement over what just happened during the final credits sequence in the Neon Genesis Evangelion TV series – so in addition to the sheer novelty value they are a chuckle-worthy series of a group having fun with the material. The booklet that comes with the Collector’s Edition has an extra chapter of the manga which - even if it’s really just a bit of promotional fluff - is still a great thing to have for the completionist which justifies the capital-C Collector tag. The front cover of the box though is a little dreary compared to the brash cool of the hazard-line manga covers and the US edition of the Blu-Ray.

Overall then, the experience of the anime version of Blood Lad is a case of "two steps forward, one step back". The artwork is a vast improvement on the original manga and so I’d recommend this anime to manga readers to see the partially-realised art of the paper now brought out in full fantastic colour, but the limited animation and rushed pace prevent it from being thoroughly enjoyable. Altogether, Blood Lad is not quite thicker than water, but a good pack of extras give it some extra substance and even if it’s more Robinson’s than Ribena it’s a diluted cordial which still has a sweet flavour.

7
An easy, undemanding watch of a zanily colourful and vivid shonen, but you may be a bit conscious of watching a motion comic more than an anime.