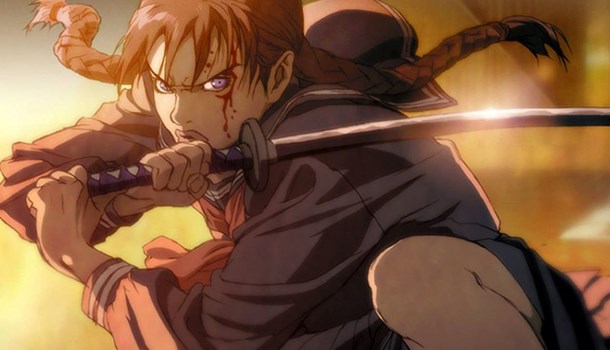 Blood arrives with a tough job - living up to the standards set by Production IG's last cinematic outing, Perfect Blue.

The atmosphere is served well by the subdued and eerie menu system, but even this is something that fades into memory once the film starts - you're instantly struck by the quality of the visuals, which are nothing short of utterly stunning - crisp, realistic and very subtle, the CGI provides an excellent backdrop to the more conventional, but still eerie, characters themselves.

Although only 45 minutes in length, the film fills its time extremely well - no scenes are wasted, nor is there any repeat animation - it may be short by film standards, but its also pure quality from start to finish.

The action scenes are constantly engaging too - the creatures, once they appear (and it doesn't take long) are suitably menacing and intelligent enough to provide an adversary that isn't simple fodder.

The plot reveals very little in terms of a larger picture - the film itself only allows a glimpse into the world of the protagonist, and we know as much about her at the end of the film as we did at the beginning - but the film is actually enriched by this lack of detail, heightening the suspense and providing a level of realism to the proceedings.

Blood Overall then, we're left with a film that manages to combine stunning visuals, an action packed storyline and an incredible music score into 45 minutes of pure gold.

10
Undeniably worth every penny spent on it.