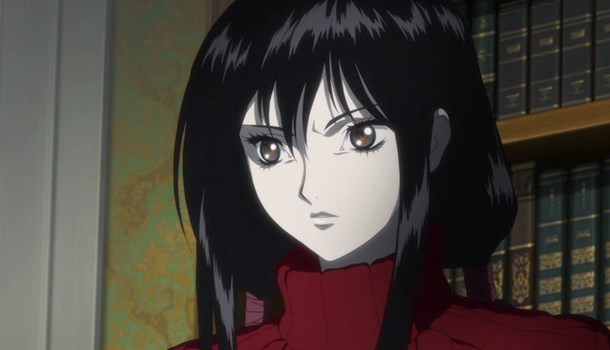 Right, first things first - if you haven’t seen the TV series of Blood-C yet (and you really should!) then you will likely not have the best of times with this film as the plot is very much focused on tying up all the series' loose ends. Now that's out of the way, with Saya returning and finally giving us the chance to see how everything wraps up, let’s see if they can provide fans with something special to reward their patience.

Following on from the events of the series Saya heads to Tokyo, tracking the manipulative Fumito and ready to dispatch him with extreme prejudice. When she arrives though, it turns out that the city is a little different than it is today. With Fumito’s company Seventh Heaven running the government from behind the scenes, Tokyo is rapidly becoming something out of an Orwellian nightmare, with massive media restrictions and full curfews in effect. After rescuing a young girl named Mana from a half-bairn, Saya reluctantly falls in with a youth resistance group named SIRRUT who agree to help her track down Fumito. Unfortunately for them all, Fumito is well aware that Saya has come for him and is more than capable of manipulating the group to suit his own needs...

First impressions of The Last Dark are not good when the film opens with yet another attempt to replicate the original OVA's train sequence (arguably one of the most perfectly paced sequences in horror), proving that even with Production IG running the show and therefore people who worked on the original likely close at hand, people still don’t seem to get why this sequence worked so well in the first place. Here it’s just very bland to be honest, with the film makers largely going through the motions without even bringing in the fairly explicit violence and gore from the series to spice things up a bit. This, combined with Saya’s new look, which for no reason whatsoever includes the school uniform from the original OVA despite this not being even vaguely similar to the Blood-C uniform, ends up giving off quite a bad impression.

Stick with it though and the film quickly manages to get its head back in the game. Once SIRRUT enters the picture, the focus becomes almost solely on Saya as a character. Whilst the original series’ goings-on are only sparing discussed it’s clear that Saya has been deeply affected by these events along with the return of some of her original memories, and despite the open-armed welcome by the group she is reluctant to accept any help or risk becoming close to them. The efforts of Mana don’t go to waste however and there is a palpable shift within Saya as she begins to allow herself to care for another person. In and around this, the series happily provides several monstrous enemies so that the pre-requisite action quota can be filled. These are pretty good fun though never quite pushing far enough to become really exciting, and often the exact reason for these sequences occurring can be a little vague. This can also be applied to the ending of the film which is more than a little exposition-heavy and doesn’t quite pack the punch of the final episodes of the series. To some extent you end up constantly waiting for the other shoe to drop.

The film is by no means perfect then, and largely this comes down to its format as a film. It’s unclear as to whether Blood-C was always intended to end with a film or if, like Eden of the East a second season had originally been planned - this would explain a lot here, such as the lengthy introduction to the members of SIRRUT (most of whom don’t really impact of the film) or the rushed ending. The story just needs more time to breathe; time that a twelve episode run would have given it. It’s likely also not helped that series director Tsutomu Mizushima had stepped out to go and work on Girls und Panzer and had been replaced by Naoyoshi Shiotani on his first full directorial gig (though he did go on to direct the excellent Psycho-Pass).

Visually the series is also a bit of a mixed bag. The traditional 2D animation is nicely done, making use of CLAMPs always-excellent character designs even if on occasion it does feel a little simplistic. The CG work too is excellent, with some really amazing work done, but the thing is that the CG never really blends in – it’s just too different in its visual style, with a big jump in the level of detail present which can really throw you as a viewer. Otherwise any attention to detail is nicely done, with the creative team really making sure to do their homework, particularly in the continued establishment of Blood-C as part of the CLAMP multiverse (insert DC comics joke here) and even going as far as to get a character's eye-colour correct for their one scene. Sound-wise the music isn’t massively noticeable throughout this film, often being drowned out by the sound effects (which include some wickedly grisly noises here and there), but the voice cast do a decent job.  This is particularly true of Nana Mizuki as the lead, who has had to shift gears to take Saya down the dark path the plot takes her on.

The Last Dark is not a wholly satisfying conclusion to the Blood-C story, but it does succeed in showing us that there are still legs in the franchise and in Saya as a character. There is enough good material here between the fun characters and interesting action scenes to make you want to keep going and see the film through to its conclusion. If nothing else it will give you a great excuse to go back to watch the original series again; while you’re at it you can re-watch the OVA too, then re-start that letter campaign to tell Sony to get their grubby paws off the rights to Blood+ and watch the live-action film. Then again, on second thoughts if you do watch the latter you may wish you hadn’t!

6
A good effort that just fails to go that extra mile.