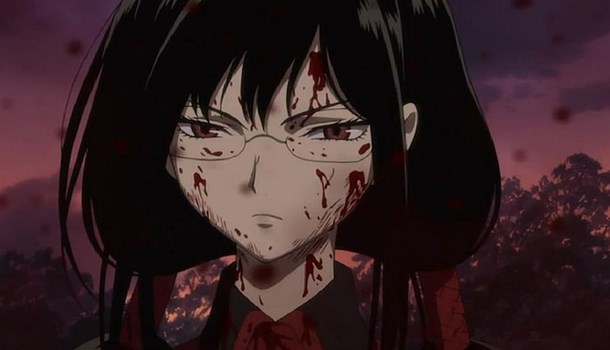 "Sierra smile, legs that go on for miles and miles..." Well, if the great bald one is playing in my head again it can mean only one thing – there’s a new CLAMP series out, but this time rather than being based on one of their manga or them just doing character design, CLAMP are collaborating on writing the story too (alright, they are involved in the manga adaptation as well, but that started serialisation only two months before the series came out and was released primarily as a way to generate hype for the anime). So the question is, can they bring anything new to the table when let loose with one of Production IG’s most memorable characters?

First things first – this is not the sequel to the classic OVA we all know and love -  that sequel (Blood+) is still sat in the limbo known as "SONY has the licence and won’t let us play with its toys". Whilst Blood-C has several nods to the original, it’s more a case of Production IG loaning out the character of Saya to tell their own story with. In fact, a somewhat out-of-place character who makes reference to a shop that grants wishes would imply that the series is actually set in the same universe as XXXholic, which certainly shares the same character design ethic...

But I digress. In this story Saya is a shrine maiden in high school. She works, hangs out with her friends, eats cake at the local cafe and wears the kind of CLAMP –designed school uniform that makes you want to go out and cosplay it right now! Oh, and she runs around fighting off a variety of deadly beings called "elder bairns" with a sword in a set of life-or-death battles. There’s also something in her past, just outside of her memory, involving a dark room, blood and a promise... To say any more about the main story here would be to head deep into spoiler territory, although I will say that by the series end you’ll be thinking of a certain popular 1998 film (though even telling you the films name would induce major spoilers).

The early episodes of Blood-C are more than a little unfocused unfortunately, and are fairly dull monster-of-the-week affairs with little to no involvement in any kind of over-arching plot. Nor do they do a particularly good job of blending the storylines about Saya’s personal life with the monster slaying, meaning that you often feel as if you’re watching two very different shows. It’s worth sticking with it however, as the two elements are individually very fun and by the time you hit the fifth and sixth episodes they do become much more effectively intertwined as they start to draw you into something that’s much more intriguing and far darker than you might expect.

One thing that really must be mentioned here is the violence - Blood-C is easily one of the most violent series I’ve seen in years, not to mention the goriest (the guys behind the Saw films should be taking notes!) They never really explain the title of the series (Blood CLAMP perhaps?) but I almost feel as if it’s an Engrish thing, with a soft C standing for "Blood Ctabbing people in the face" since this seems to be the creators' favourite thing to do! This is by no means a series for the young or squeamish, and that fact that the series got away with a 15 rating is shocking in itself.

Visually, the series is exactly what you’d expect from a reunion of CLAMP and Production IG – gorgeous character designs for the girls, pretty boys, long legs all around and super smooth animation tying it all together. It’s everything that you’d want from the series in this area. Sound-wise, the US cast do a reasonable job but with Nana Mizuki as Saya in the Japanese dub (and on singing duties for the ending theme) there’s really no contest on how to watch the series, and she leads a brilliant ensemble cast that’s an absolute delight to listen to.

Despite a somewhat rocky start the series picks up the pace and really sucks you in in a big way, though it is sadly missing one vital component – an ending. Yes, that’s right, Production IG has pulled an Eden of the East again and the ending to the series will be coming later on in the form of Blood-C: The Last Dark which Manga Entertainment will be releasing at a later date (although we did get to sneak a look at it during last year's Scotland Loves Anime - Ed.). Still, even when you know we’ll be left waiting for more I can still highly recommend Blood-C as a brilliant action series that will help remind you why production IG and CLAMP are such huge players in the business – they really know how to knock ‘em out of the park!

8
The dream team of Production IG and CLAMP pulls it off.