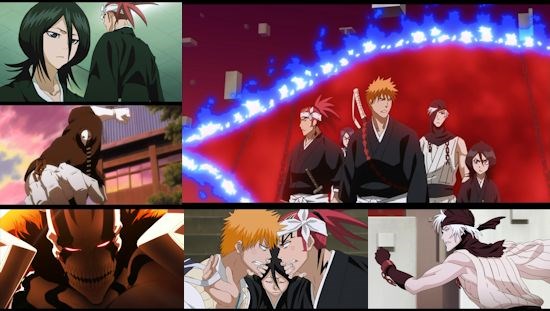 For all of its tales of the afterlife, one thing that Bleach has never really covered as part of its universe is the explicit concept of Hell... until now that is, as it becomes the centrepiece of this fourth standalone Bleach movie, Hell Verse.

This latest film to be given a UK release certainly lays its cards out on the table early on in terms of one of its major goals - that being the provision of some suitably spectacular action.  Thus, the opening scene is a fantastic and striking high speed conflict that admittedly makes little sense when offered up without any connective tissue to speak of, but it certainly serves as a bombastic and eye-catching opener.

With that line drawn in the sand, we return to the rather sleepy town of Karakura, the home of Ichigo Kurosaki and friends.  With Soul Reapers Rukia and Renji in town on a mission from which Ichigo has been excluded, it isn't long before a couple of strange "accidents" suggest that something is amiss.  Needless to say, that something has business with Ichigo, and it's come straight from the depths of Hell to discuss it.  Given that actions speak louder than words, the group in question also wastes no time in kidnapping one of Kurosaki's siblings, meaning that it's off to Hell we go for a rescue mission that could threaten the entirety of Earth were it to go awry.

If I can be candid for a moment, the plot of Hell Verse is as pointless as it is a poor fit with the wider Bleach franchise - why was Hell not explored or mentioned to any notable extent that I can remember in the series previously, and given that it's a home for people who did terrible things in life how come there seem to be so many of them in Soul Society and beyond?  The answer is, of course, "we made it up for this movie", but that doesn't disguise the fact that the film's plot is paper-thin and decidedly shaky at best, not helped by an unwillingness to bring any sense of depth to either its film-exclusive characters or the regular cast.

The good news, however, is that this really doesn't matter - "Hell" is little more than a cipher to drop a tonne of action into a movie and to do so in a setting that allows for some visual innovation beyond the norms of Bleach's TV outings.  Indeed, the fight sequences flow thick and fast throughout the movie, and this is certainly no bad thing - this is Bleach at its high-octane best, making the most of the additional animation budget afforded this theatrical movie, and a lot of the battles on show here are simply stunning to behold.  Even when we aren't in the midst of battle, Hell Verse is a thing of beauty visually - Hell's use of a muted colour palette is visually striking, and every movement and facial expression is clearly rendered with more care and attention than in your average episode of the TV series.  This also serves as a great excuse to pick up this movie on Blu-Ray - sure, the DVD release seems decent enough, but this visual pinnacle of the franchise in animated form deserves a High Definition viewing.

Although its entirely free of extras, there's no faulting Kazé's release here - subtitles are all present and correct with absolutely minimal errors, the Blu-Ray transfer looks superb, Shiro Sagisu's soundtrack urges on the film wonderfully throughout and the English dub is what you'd expect of the franchise at this point, proving to be polished albeit not outstanding.

Taken as a whole, your enjoyment of Hell Verse will really depend upon what you look to Bleach to provide - if you want smart story-telling, character-driven drama or eye-catching scenarios, then Hell Verse has none of these things, providing instead a predictable and forgettable story that goes through the motions without any attempt to capture the viewer's heart or imagination.  Then again, if Bleach is all about cool action sequences and pitched battles, then Hell Verse delivers this almost ceaselessly from beginning to end, barely finding time to pause for breath as we leap from one scrap to the next.  Once this thirst for action is complemented by some fantastic animation that really brings those conflicts, their scope and the environments in which they occur to life, you have something that will catch your eye even if it won't ask you to engage your brain.

Luckily for me, slick action is one of the cornerstones of what I enjoy about this franchise, and thus Hell Verse leaves me feeling well served.  If a generic battle anime scenario isn't your thing however, this film will be a big disappointment.

7
Superb animation, used to deliver a stream of stunning action and battle sequences. Sadly, this comes at the expense of good story-telling.
LATEST REVIEWS