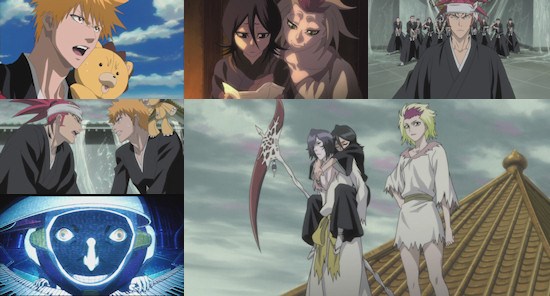 Bleach the Movie 3: Fade to Black

Its time on Japanese TV might have come to an end (for now at least), but there's still no shortage of Bleach left waiting in the wings to reach the UK on DVD releases, and while the speed of those releases has been picking up of late we're also now about to be treated to a slew of Bleach movie releases for those looking to grab some shounen action in High Definition.  With the first two movies, already released previously on DVD, getting a shiny new Blu-Ray treatment for UK fans, the third movie based upon this franchise is a new addition to the show's canon in both DVD and Blu-Ray forms, and we were lucky enough to check out the latter to see how it stands up.

As seems to be the tried and trusted formula with theatrical outings of big Shounen Jump properties, Fade to Black leaps straight into the thick of things, with Mayuri Kurotsuchi attacked in his lab deep within Soul Society - the next thing we know, strange white goo is pouring out across Seireitei (keep your minds out of the gutter, I know what your thinking) and literally petrifying anyone that it touches.  While all of this is going on, Rukia finds herself approached by a pair of individuals who somehow succeed in whisking her away in the midst of all the confusion.

Meanwhile, back in the land of the living everything seems rather sedate, but it soon becomes clear that something is amiss - Rukia has, quite simply, been forgotten by everybody, including Ichigo himself for a brief moment.  Realising that this can only mean trouble, it's time to head off to Soul Society to find out what's happened to Rukia - the trouble is, it seems that the existence of Ichigo Kurosaki himself has been forgotten by all and sundry within Seireitei, which makes any attempts to help with the crisis gripping the area decidedly more difficult.

So the scene is set for the remainder of Fade to Black - can Ichigo save Rukia, convince his Soul Reaper colleagues that he's a friend rather than a foe and help them in defeating the menace which is covering a large portion of Seireitei?  Besides which, just who are the mysterious duo which kidnap Rukia, and what do they want with her?  Problematically, the answer to this latter question resides which Rukia's memories - memories which have themselves seemingly been wiped by her captors.

After a blistering and engaging start that almost threatens to become a little too fast in its progression (ostensibly cutting out a swathe of its human-based cast where you might expect them to be involved in some way), Fade to Black keeps up its pace reasonably well throughout by mixing its dramatic and emotional content with mostly short but sharp bouts of action until we reach the inevitable all or nothing finale that acts as a major set piece to resolve everything in a relatively tidy fashion (or at least as tidy as you can make it when you've ripped up most of Seireitei.  Its plot isn't exactly innovative - how many times have we seen the whole "nobody remembers who I am" concept used in anime or movies in general? - but its strong enough to keep things moving, and the focus on Ichigo and Rukia and the bond between them ensures that perhaps the strongest relationship in the entire series is used to power the film towards its climax.

Set against the pretty bog-standard animation that accompanies its TV outing these days, it has to be said that Fade to Black looks fantastic - particularly so on Blu-Ray with a gorgeous transfer that makes the most of the higher animation budget afforded this theatrical outing.  Admittedly the film's art style is a little inconsistent (at times Rukia's eyes look massive even by anime standards!), but some of its action scenes are stunning and the overall visuals of the movie are undoubtedly a cut above the norm for the franchise.  If you have the ability to watch this film in High Definition, I'd absolutely recommend doing so.

The audio side of Fade to Black's overall package is also good, with a suitably loud and vibrant soundtrack with accomplished music from Shiro Sagisu as always, and some excellent voice acting turns from the Japanese cast while the film's English dub cast also put in a good performance.

Looking at it as a whole, Fade to Black isn't an incredibly memorable film - much like many of the characters within it, there's a real risk of memory loss regarding the movie not too long after watching it.  Bleach has never really been about delivering intelligent concepts, the constraints of its theatrical format and the inability to "break" anything that would otherwise impact the TV series means that it'll always be limited in scope.

Provided you aren't looking for anything deep, this isn't necessarily to the film's detriment - as an entertaining ninety minutes of shounen action with some moments of real flair in terms of its delivery though, Fade to Black does more than enough to draw in existing fans and keep them hooked while also providing some of the best looking Bleach animation we've ever been lucky enough to lay eyes upon.  If you count amongst that number of Bleach fans, Fade to Black is certainly worthy of a place in your collection.

Disappointingly, there are absolutely no extras on the Blu-Ray release of the film - options are limited solely to English and Japanese DTS-HD Master Audio 5.1 language tracks with English subtitles.

7
A great-looking and entertaining theatrical side-story - decent action and a solid but uninspired story combine to make this a worthy purchase for Bleach fans.
LATEST REVIEWS