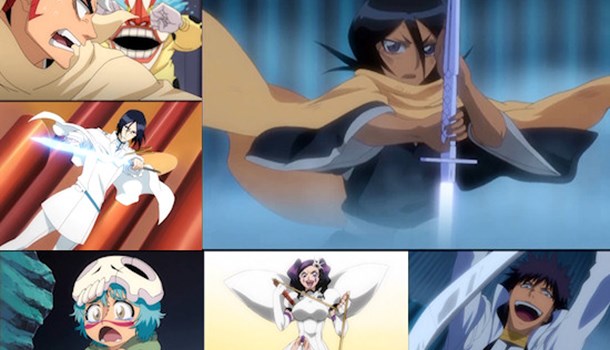 It may be a new series of Bleach for the new year, but the setting remains the same as we enter the eighth season of Ichigo and company's adventures.

That means that the entirety of the rather measly (by usual standards) eight episodes spread across these two DVDs remain entirely focused upon the attempts to rescue Inoue Orihime from the clutches of Aizen within the depths of Hueco Mundo.  More importantly, with its five-person rescue squad splitting up to cover more ground, these episodes give us a variety of battles to concentrate on, as each of our heroes comes up against different challenges posed by the various Espada with which they come into contact, while those higher up the career ladder created by Aizen work towards their own nefarious ends.

Needless to say, each and every one of these conflicts is delivered in typical Bleach style, with lots of verbal sniping and back-chat, revelations of hitherto unseen powers that each combatant keeps in reserve until a critical moment and so on.  Beyond that, the entertainment value of each fight varies wildly, veering from Sado's pugilistic and rather dull affair as his true powers are revealed through to Rukia's far more personal scrap with her fated assailant which is arguably the highlight of this release.

Also present here is the show's willingness to revert to comedy on occasion to keep things moving along, although unfortunately for this volume it continues to be brought forth by some of the most irritating characters ever to grace the series - come the end of these episodes I found myself genuinely hoping that someone might put an end to the lives of Nel, Pesche et al, if only to shut them up and put an end to the often childish and dumb toilet humour that they add to the current scenario.  Thankfully, these characters are at least toned down a little within the provided English dub, making it slightly more bearable for the most part thanks to its solid execution.

Griping about those intensely annoying individuals aside however, everything available in this volume is exactly what you'd expect from Bleach, so fans of the show and its major players will doubtless be able to derive some enjoyment from it.  From a more critical view however, it has to be said that the pace of the story at this point feels glacial, with battles taking far longer than should be required of them and large chunks of time spent simply running down corridors while characters introspectively ponder the current situation faced by themselves and their colleagues.

This leaves us with a volume of Bleach which is pretty typical shounen fare - a fair dose of action blended with comedy, but all delivered in a frustratingly slow-moving fashion that leaves us only a little closer to our goal than we did at the start of the volume.  It's the kind of thing the hardcore fans will be able to forgive easily enough, but for those wavering as to their love for the series it could well prove off-putting as the show's jaw-dropping moments become fewer and further between, while its animation feels increasingly mediocre.

English 5.1 and Japanese 2.0 audio with English subtitles.  As per usual, extras consist of production art, text-free ending credits and trailers.

6
This volume promises plenty of big battles, but delivers them too slowly to be anything more than occasionally engaging.
LATEST REVIEWS