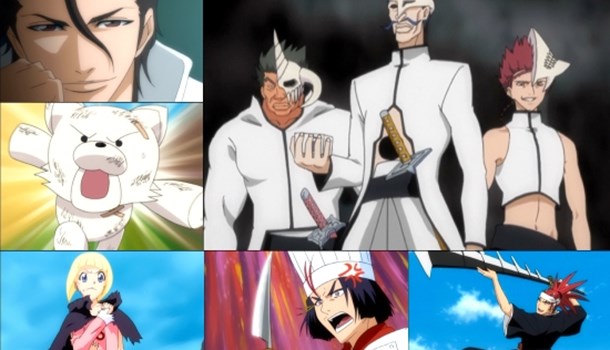 With the Arrancar still at largely under the command of Aizen, and given that the end of the previous season of Bleach lifted the lid on the group's ultimate plans and goals, it's time to dig in for another season of hack-and-slash Soul Reaper action.

At least, it should be time to get back into the thick of the action, except for some reason the first few episodes on show in this release are filler stories.  These aren't just any old filler episodes either, somehow managing to trawl the dregs of bad writing and story-telling to deliver four episodes of insipid, vapid and completely pointless nonsense.  Do we care about seeing Hitsugaya playing football with Ichigo's sister?  A baker who died before his mum ever got to taste his cakes?  A kendo match?  Of course we don't, especially when they're presented via clumsy stories and some of the worst animation this series has had to offer thus far.  The only redeeming feature I can think of from these episodes is that it brings us the timeless line of dialogue "I won't ever say that it hurts when I see a cake anymore".  Yes, quite.

Thankfully, once we've endured this handful of episodes normal service is resumed as we return to the mainstay of the series, initially via a small group of rebels who turn against Aizen and attempt to snatch the Hogyoku for themselves before making their way to the world of the living only to find some staunch resistance in their path.  After that, Ichigo and company find themselves facing the real deal, as a group of Espada launch an attack against them including said Hogyoku given human form (albeit a very irritating form).  While this attack provides our action quotient for this volume, the real story here relates to Inoue, who is about to find herself in a decidedly tricky situation - knowledge of which leads to perhaps one of the most touching scenes the series has seen fit to provide thus far as the episodes across these two DVDs come to an end.

It's difficult to find anything new to say about Bleach at this juncture - ignoring those god-awful filler episodes at the start of this volume, the remaining episodes are everything you'd expect from the series in terms of over-powered, pitched battles in the sky with all of the usual shounen twists and turns and a sprinkling of humour on top.  Such moments are a bit like wearing a pair of comfortable slippers by this point - you know exactly what you're going to get, and it's somehow a welcomingly predictable state of affairs to return to at the end of a long day.

We can't help but get the feeling that this current story arc is nowhere near the quality we came to enjoy prior to the show's Bount side-story - it simply isn't as engaging or urgent in its tone right now - but it still has enough going for it to keep Bleach fans hooked once those terrible first few episodes are out of the way.

English 5.1 and Japanese 2.0 audio with English subtitles.  Extras are the usual fare for this series - textless opening and ending credits, production art and trailers.

6
The first four episodes of this volume are terrible beyond belief, but the remaining instalments have just enough of the old Bleach magic to cover for them somewhat.
LATEST REVIEWS