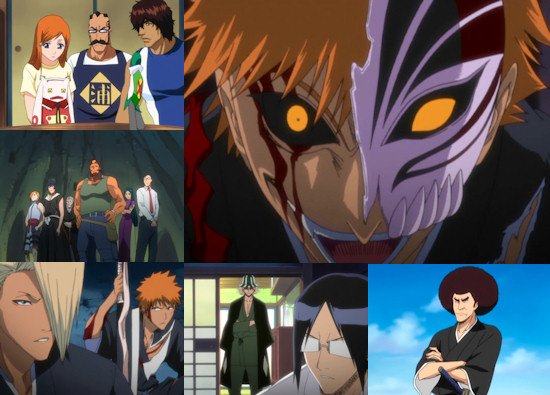 I have to begin this review with something of a public service announcement; a warning, if you will - If you're expecting this to be the final volume of this show's Bount saga, then think again.  Yes, that's right everybody, you still have the whole of series five featuring our wannabe vampires to sit through before we return to the mainstay of the series and its manga roots.

If that news hasn't left you in too much despair, then this final batch of episodes from series four finds our heroes on the back foot, with Ishida traumatised by the loss of Yoshino while the rest of the Bounts seem to have disappeared entirely off the radar.  This moment of relative calm allows the series to indulge in a spot of filler within its filler arc, kicking things off with a light-hearted episode before returning to the core of this particular story.

Thankfully that distraction is the only one that we're presented with during the three discs and twelve episodes presented here, as Bleach endeavours to close this chapter of the Bount arc with action aplenty.  Thus, we see the Bounts "levelling up" thanks to a technology they've developed to harvest human souls, while Ichigo and company find themselves joined by a handful of Lieutenants from Soul Society who have been tasked with helping to eliminate the Bount threat.  Throw in revelations about the origins of the Bount race and the opportunity for a return to fighting fitness for Ishida, and you have all of the required ingredients to keep the series ticking along nicely.

While it's easy to dismiss filler arcs from shows such as this one as entirely pointless, Bleach is at least trying its best to serve up something that will entertain the fans and keep their interest for the duration, and this is something that it largely succeeds in doing.  Although I'd dearly love to see a faster return to the show's manga roots and I'm not hugely excited to see the Bount story elongated further, these episodes do at least keep the action flowing and the pace of the plot moving without becoming too bogged down in flashbacks, back story and the like.  There are episodes when these frustrations do raise their heads (do we care about the tragic past of one particular Bount, for example?  I would wager the answer is no), but never for long enough to make for a truly frustrating viewing experience.

Still, putting aside the fact that you know any fallout from this story arc won't carry over into the series as a whole, there's still quite a lot to enjoy here - The comedy isn't at its sharpest broadly speaking, but the action remains compelling and occasionally uncompromising if you can stomach the occasionally ridiculous powers of the Bount and their Dolls which threaten to eclipse the real reason for watching the series, that being watching cool Soul Reapers doing nifty things with crazy swords.  It feels almost criminal for me to give a filler arc the thumbs-up, and it certainly doesn't showcase this series at its very best, but even casual Bleach fans will probably enjoy the climax to this part of the Bount saga, before it thrusts us back into Soul Society for season five.  Whether this particular story can last the pace for the entirety of series five remains to be seen, but so far it's a case of mission accomplished in terms of overall entertainment value.

7
We're only at the half-way stage of the Bount arc, but so far it's managed to serve up pretty entertaining fare.
COMMENT AND DISCUSS
blog comments powered by Disqus