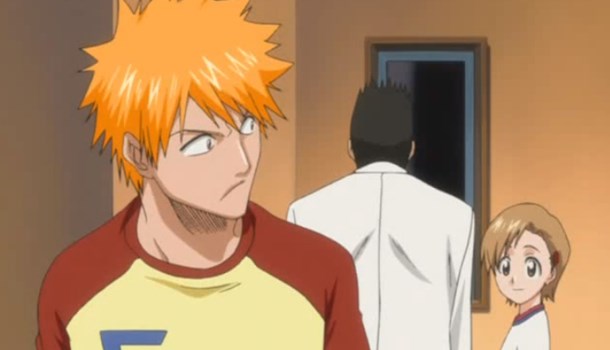 With Rukia saved and their work done in Soul Society, series four of Bleach sees Ichigo Kurosaki and friends return to their normal, everyday lives just in time to start a new semester at school.  Well, I say "normal", but needless to say any kind of normality doesn't last long in the context of this particular series - Indeed, it's something of an unattainable goal in the light of everything this group has witnessed and been through in recent times.

For Inoue in particular everything that happened in Soul Society still appears to be weighing heavily upon her, and it is perhaps the moments of weakness that arise from her concerns that lead her to receive a most unexpected visitor.  It's clear from the outset that things are not as they seem here, and before we know it she's been whisked away, along with any memories her classmates have of her.

This is only the beginning of an ever-more threatening turn of events, as various members of Ichigo's group are kidnapped and released by some new opponents who seem Hell-bent on playing games with their prey, putting them up to ever more complex and seemingly dangerous challenges.  So begins Bleach's first filler arc, and it has to be said that it's actually a pretty compelling viewing experience up to this point, introducing some intriguing characters with great, distinctive designs while the action is punctuated brilliantly by Shiro Sagisu's ever-marvellous soundtrack.

Unfortunately this particular portion of the story ends as something of an anti-climax, as it's revealed that what we've been watching with rapt attention for a few episodes is little more than a pre-cursor, a starter if you like to the main course which the series then serves up to us.  In fact, food analogies are probably pretty appropriate for the main content of this new story arc, featuring as it does the introduction of a number of wannabe vampires known as "Bount" - An even greater threat to both our heroes and their town of residence as a whole.

For all of the "Huh? Is that it?" exclamations caused by the premature end of the first story to come out of the episodes on these discs, thankfully the Bount arc which takes on the baton is equally fast in getting up to speed and bringing us Bleach's usual blend of action and intrigue as it sets out to build up the particulars of its own individual tale - A task which it handles pretty respectably in all honesty, thus far avoiding some of the pitfalls that most commonly afflict series like this when they deviate from the manga.

Of course, when it comes down to it the biggest issue any filler arc has is the fact that you know, come the end of it, everything has to be reset to more or less how it was before that story began, and of course even Bleach can't ignore that particular fate.  However, if you can manage to suspend such thought processes for the duration of these two discs, then what you're left with is actually very entertaining - Not up to the epic and grandiose nature of what came before perhaps, but some decidedly watchable anime in its own right.

Judging by the eight episodes here you could almost label this volume as an example of "filler done right" - It'll never live up to the reputation and wonder of the "proper" series, but if you're a Bleach fan it's hard not to enjoy the story and plot that is served up here.  Whether it can keep up that level of quality is, of course, another matter, but if nothing else the early signs are good and even if you aren't a DVD collection completist then this volume is worthy of consideration.  My only wish perhaps would be the addition of more extras over these two discs to give something a little more special to the hardcore fans of the series, but as it is you'll just have to make do with the usual top-notch video, audio and subtitle quality without much in the way of extra features.  Even without such luxuries, there's still plenty to enjoy from the actual episodes themselves, and I honestly wasn't sure I'd be saying that before I started watching these discs.

8
It may be filler, but the episodes on show here still manage to be entertaining while keeping the Bleach spirit intact.
LATEST REVIEWS