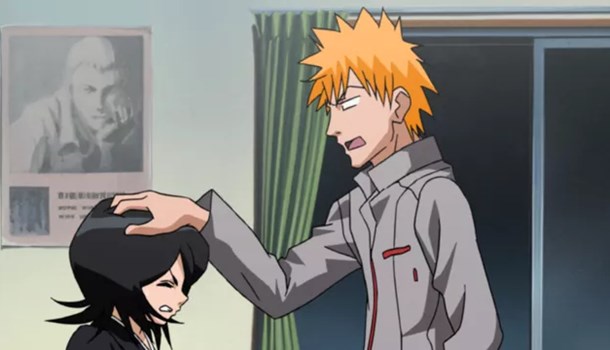 I would imagine that for most of you reading this, Bleach requires no introduction.  Even if you haven't been keeping an eye on this relative anime superstar's following and progress in Japan, you may well have caught it complete with English dub on the satellite channel Anime Central.  Whether you're new to the show or a more seasoned Bleach watcher, the first set of episodes are now available for your delectation on DVD... Which is exactly why we're here right now.

In case you're new to the show, Bleach takes us into the life of Kurosaki Ichigo, a rather moody and irritable fifteen year-old with two very unique properties - A head of bright orange hair (the inspiration for the show's title) and, more importantly, the fact that he can see ghosts.  At the same time, there are some strange goings-on in town - Happenings which soon collide with the life of Ichigo and his family in dramatic fashion.  The resulting fall-out drags Ichigo, somewhat reluctantly, into the world of the Soul Reapers, thanks to a meeting with one such 'Shinigami', Kuchiki Rukia, who transfers her powers to Ichigo as a last resort so that he can save his family from a Hollow - A 'spirit gone bad' whose only aim in life (or rather, death) is to devour the souls of others to feed its hunger.  Ichigo succeeds in protecting his two sisters, but as a result finds himself working as a temporary Soul Reaper while Rukia regains her powers.

What follows across the twelve episodes that make up volume one of Bleach on DVD sees Ichigo pitted against numerous Hollows, while seeing several of his friends put into peril as we learn more about the various relationships and back stories that make up this series' main cast of characters.  Indeed, these opening episodes of Bleach are not far short of a master class in pacing and building a storyline, blending action, character building and a smattering of lighter, more humerous moments with aplomb.  Each episode moves along swiftly, holding your interest with ease, keeping things moving fast without ever rushing the advancement of the plot.  Even the fact that many of the action scenes tend to be rather shallow (or should that be Hollow?) 'run at the monster while shouting, hacking and slashing' affairs doesn't detract from the fact that Bleach just works.  A lot of this is down to some excellent characterisation and scripting - All of the main players within the show are very much likeable characters, the mix of action, dialogue and humour is spot on, and the otherwise potentially dull battles with Hollows are mostly spiced up by adding personal elements to the fray.

Away from the main story itself, the animation quality of Bleach tends to fluctuate a bit from episode to episode (as is the case with most epic series of this nature), but the whole thing is held together fantastically by Shiro Sagisu's (of Neon Genesis Evangelion fame) soundtrack, which acts as a perfect companion to the varying atmospheres projected by the show.

In case you haven't noticed, I'm positively gushing with praise for Bleach.  It doesn't try to be some kind of deep, highbrow series, allowing itself to thrive on being a simple yet addictive blend of action, humour and the relationships between characters.  Looking at its component parts, it shouldn't be anything special, but blend them all together in the way seen here, and you have yourself one excellent series.  Be warned though, get addicted to this anime on DVD and you'll be needing a fat wallet - With the show currently reaching its 150th episode in Japan and still going strong, you might well find yourself spending copious amounts of cash to keep up with the adventures of Ichigo and company.  If you can live with that however, this opening shot from the orange-haired one is a must-buy.

9
An excellent introduction to the show - Bleach is a peach.
LATEST REVIEWS