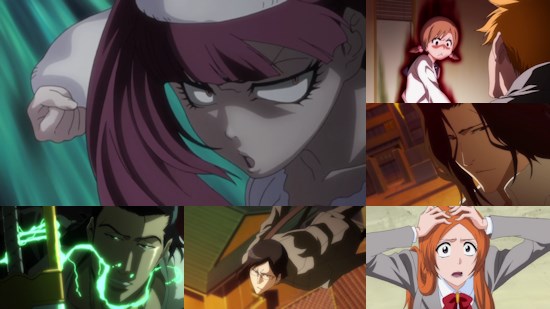 Well, here we are - the final series of Bleach's TV anime run. Things look like they're all set for a decidedly low-key finale too, given that Ichigo has finally hung up his substitute Soul Reaper garb to return to the ghost and Hollow-free normality he's only been able to dream of up to this point.

Perhaps unsurprisingly though, Ichigo is feeling a little uncomfortable with this change of pace - he's trying his best to adjust to normality (and not to mention the fact that all of his friends now know all about his Soul Reaper past), and of course Rukia's absence is keenly felt, but above all no longer being the protector of his friends and his hometown sits awkwardly with our one-time hero - just what is he supposed to do with his time? Ichigo's answer is drifting from job to job, but even this is hardly the same as fighting immensely powerful enemies in high-stakes conflicts.

Of course, this malaise doesn't continue for too long, and the suggestion that this is not a last peace comes via an individual who informs Ichigo that he should act soon lest his friends and family be thrust into danger. This seems like nothing but bluster until mishaps start to befall those close to Ichigo, at which point it seems that this warning was more than a little prescient, causing our protagonist to make use of the business card given to him by the individual in question to put him in touch with a mysterious organisation known as Xcution.

In short, this group of individuals have knowledge of the world above and beyond even that of the Soul Reapers, as they reveal that it isn't just living things that have a soul - everything has one, inanimate objects and all, and the key to this group's power is manipulating the souls of this matter to their benefit. This ability is all the key to restoring Ichigo's powers - or at least an approximation of them - which will in turn allow Xcution's members to return to normal, human lives. Of course, learning to use this potential power - known as "Fullbring" - means another round of training will be required for Ichigo, and time is at a premium as the true villain of this story makes his move.

During these latter seasons of Bleach, it seems like the series does its best work when it has to push out of its comfort zone of traditional shounen action, and that is on show again in the early episodes of this volume. There's something oddly compelling about watching Ichigo try to figure out what to do with his life now he's just a normal kid, and these episodes are well paced, directed and animated to bring an odd sense of quiet melancholy to proceedings which feels like a breath of fresh air compared to what you might normally see from the series. This wouldn't be enough to sustain an entire series on its own though, and eventually we get to some more traditional Bleach fare and perhaps some of the silliest ideas and abilities it's employed so far. A glass of whisky has a soul? A character gains immense power when her shoes get dirty? One suspects that the creator of these ideas had been staring into the bottom of too many glasses of liquor themselves...

If you can get past how ludicrous some elements of its story are, there are some decent moments here - some of the new characters introduced in this arc are great, there are some interesting new powers on show alongside the decidedly silly ones, and the depiction of the show's long-standing characters is really satisfying. It's this latter point in particular that is the highlight of these episodes - the likes of Chad and Inoue really get to show how they've progressed and grown in particular, which leans in to the idea espoused later in this volume that Ichigo's continued insistence that he needs to be the one to protect everybody around him isn't necessarily entirely correct any more.

On the technical side of things, all is well - the English dub feels better when reduced to its core cast and some newcomers, the Japanese audio and English subtitles are all present and correct, and video quality is decent enough for a DVD release, aided by the splitting of its twelve episodes across three discs. It's been quite some time since we've had cause to complain about a UK release of Bleach, which is good news for sure.

The upshot of all of this is that what we have here is a pretty strong penultimate volume of Bleach - it has some hefty flaws which arise from its need to weave a story in the wake of the loss of Ichigo's powers, but if you can buy into its ridiculous core premise then the direction, animation and mood of this volume is actually the best we've seen in some time, and these episodes also make good use of some of the show's most beloved characters. The danger, of course, is that this sheen will fade by the time the story - and the series - reaches its climax, but for now this seems we're set for a pretty solid send-off for Bleach.

7
Parts of the concept for this story arc are laughable, but there's some good use of mood and characters to more than make up for that in this penultimate volume of Bleach.
LATEST REVIEWS