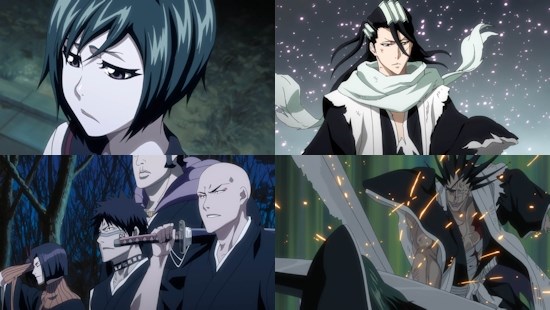 A new season of Bleach begins (and seemingly ends from what we've seen, thanks to Kazé's unusual definition of what constitutes a series) with this latest UK release on DVD - will it treat us to further adventures lifted directly from its source material, or are we returning to the land of anime-original filler?

Well, let's not keep you in suspense - despite its dwindling count of remaining episodes, we're well and truly in the latter category for Bleach Series 15 Part 1, which means that its filler time once more. Mind you, at least this isn't the kind of insipid comedy filler episodes that have been particularly grating in some recent volumes, instead granting us with a full-blown original story that does at least have some promise inherent to it.

Just as normality looks set to return after the defeat of Aizen, so another unusual phenomenon rears its head to give cause for concern - namely, the disappearance for large chunks of time by Soul Reapers travelling between their own world and that of the living. The root cause of this phenomenon appears to be some kind of gap in time within the Precipice World which links these two worlds - but what exactly is the cause of this gap, and is it in any way related to the unconscious, naked girl that Kon stumbles upon in town?

When Ichigo is called upon to investigate these goings-on, the severity of affairs proves to be even worse than anticipated, as he returns to Soul Society to find himself being chased down and arrested by his former comrades. Just what is going on? As you might imagine, all is not as it seems here...

Ultimately, this latest story arc is a vehicle to provide the viewer with one thing - an opportunity for the various captains and high-ranking members of Soul Society to clash against both one another and themselves via a team of replicas of said individuals sent out into the world with a malevolent goal in mind. Admittedly, this sounds like a pretty cool, tried and trusted, way to bring about some hot action scenes and exciting content... which makes the fact that the episodes spread across these three DVDs are so bland rather baffling.

Put simply, it should be nigh-on impossible to make skirmishes between such powerful individuals dull, but for the most part this story arc thus far is exactly that. It takes far too long with its setup for starters, which doesn't exactly help matters, but even once the rubber hits the road there are rarely any moments which make you sit up and pay attention. Even putting a story that's hardly adventurous in narrative terms aside and looking at things from a pure shonen action perspective, there are a few enjoyable moments but not enough to justify the time spent on a story that we're only at the half-way point of come the end of the volume.

The only area where things feel pretty strong across this volume is in terms of animation quality - the show's latest opening credits are arguably the best yet and actually deliver on at least a little of the cool factor that this story arc should carry, while the animation of its action scenes and the distinctive look of the story's "Reigai" clones are undoubtedly appealing.

From a technical perspective, we have no issues to report with this DVD release - subtitles are present and correct, video quality is acceptable if not the best we've seen around, and although the English dub sounds increasingly phoned in by a cast bored to tears with the task at hand it still does the job of delivering the story proficiently enough. Thus, we can mark a tick in the "this release is not broken" check box, which is always a relief.

With just a few more volumes left of Bleach's TV anime run at this point in time, it feels like boredom is the watchword here - when you get the impression that the show's production crew and voice casts are going through the motions without any passion for the material they're producing, you can imagine that they must have been somewhat relieved about calling it quits when the series sputtered to a premature end. Perhaps we're reading too much into things, but nonetheless the original story presented here is unspectacular in concept and utterly ordinary in execution, which is disappointing for a story that at least had the potential to deliver some real spectacle. Die-hard Bleach fans will surely want to see the series through to its bitter end on DVD, but if you don't have such a desire and simply want to see the continuing story from the manga then this is a volume you can safely skip.

6
A competent anime original story that should deliver so much more than its mediocre, half-hearted delivery provides.
LATEST REVIEWS