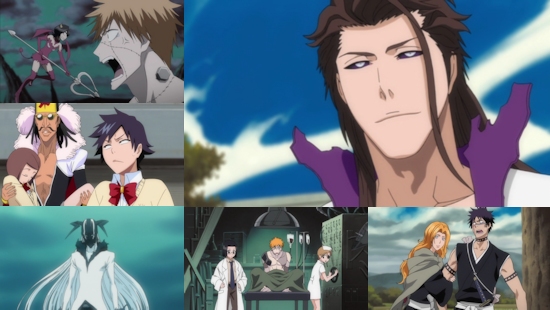 We continue to march inexorably towards the end of Bleach's TV series arriving in the UK on DVD, but first we have to tackle Ichigo dressed as Frankenstein in a dumb horror-themed filler episode!

Fear not, however, for this latest instalment of Bleach isn't all filler. Instead, these filler episodes are sprinkled throughout the volume to infuse it with flavour - we'll leave you to imagine what that flavour might be. From a love story between Shuhei and Rangiku through to a spoof of the super sentai genre (original, huh?), there's a smattering of episodes that you simply won't care about at all.

Now that we've gotten that out of the way, on to the good news - that this volume also finally brings us to the end of its current major story arc (subtitled Fall of the Arrancar for this UK release). Thus, Ichigo finds himself required to face his inner demons once more, inevitably playing a pivotal role as perhaps the only person who can stand in the way of the seemingly unstoppable Aizen. Then again, perhaps the real solution to preventing Aizen from carrying out his nefarious plan resides closer to home...

As has increasingly become the case with Bleach (and ignoring its filler instalments), this volume contains some moments of classic shounen story-telling - big twists followed by big battles, and with flashbacks to explain some of the revelations that come with it. These are the moments that remind you of what Bleach does at its best, as there are some compelling moments to be found here, mostly revolving around Gin on the one-hand and Ichigo's latest travails in the name of self-improvement on the other. However, this doesn't disguise the fact that this grandiose story that has been building, shifting and moving for so long ultimately just fizzles out - its climax is shockingly unsatisfying given how long it's taken us to reach it, and a story that has had so much time afforded it really shouldn't end with the viewer quietly exclaiming "Wait... is that it?" Given that time is running out for this TV series as a whole, it leaves us wondering whether the entire show will suffer a similar fate.

From a technical perspective, this DVD release from Kazé is competent - everything is present and correct across the three discs which make up this release, subtitles are good, and video quality is just fine even if panning shots seem particularly juddery even by the normal standards of an NTSC to PAL conversion. The English dub is present and correct, although it sounds increasingly half-hearted in terms of some of its voice performances to our ears - perhaps even the show's cast are losing interest in the story and cavalcade of filler at this point?

If you've been keeping up with Bleach to this advanced point, then this is certainly a must-have volume simply because it closes out such a major story arc. However, with some frustrating filler that ranges from okay to terrible scattered over the volume, and the fact that the main story itself sputters to a subpar climax, you might not be as happy with what you find contained here as you may have hoped for.

6
Filler episodes detract from a main event which itself fizzles out disappointingly.
COMMENT AND DISCUSS
blog comments powered by Disqus