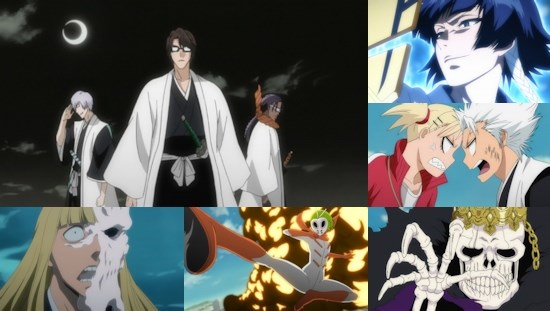 Although it wasn't an entirely unqualified success, the first volume of Bleach's thirteenth series brought with it moments that served as a reminder of what its story can do at its peak, providing some incredibly intense scenes that marked the kind of high point for the series that we haven't seen in some time.

The trouble with such outstanding moments is that, by association, the episodes surrounding such flashes of brilliance pale in comparison, and that was the case with the remainder of that volume - don't be mistaken, it had no shortage of content using the typical Bleach formula to share, but they struggled to stand out against such a striking example of the show's full capabilities.

This negative effect largely carries on into the second volume of series thirteen - it promises much, with Aizen and his remaining allies led into a pitched battle against the Visored, who themselves enter into an uneasy alliance with the Soul Reapers on-hand, but everything plays out exactly as you'd expect it to with few surprises. Yes, there are twists and turns and yes, there are pitched battles, but every moment seems clearly foreshadowed to the point where any real tension from these battles drains away quickly with only one or two exceptions.

This lack of tension isn't helped by some occasionally ill-advised decisions to leap into flashbacks in the midst of episodes - while these fill in some important parts of the wider narrative of current events, it often breaks up the action in a less than satisfying way and makes for a stop-start viewing experience which can prove to be distracting. The fact that all of the major skirmishes here take place high in the skies only further detracts from the overall experience, leaving the viewer watching events unfold against an unchanging canvas of boring backdrops that does nothing to fire their imagination.

Beyond the above aura of negativity, long-standing fans of Bleach will find plenty of the kind of fare that they know and love here - nothing but pitched battles from start to finish, and the promise of more tantalising fare around the corner as the series begins to build towards a climactic battle between Ichigo and Aizen to bring about the realisation that we're not too far away from the end of the franchise in its current animated form.

Even in spite of those monotonous backdrops, there are still some visually striking moments to be found across these episodes and a decent level of animation quality overall to pull off everything that's occurring, accompanied by the ever-consistent voice acting work available in both the English and Japanese language options available here. Video and audio quality are both acceptable here, with episodes given plenty of room to breathe in terms of available space over the three DVDs utilised here.

Negativity and a slightly jaded view on these episodes compared to what might have been aside, Bleach continues to serve its fans with everything that they ask of it for the most part as it continues to move its main storyline forward in this thirteenth series at a reasonable clip. It's clear at this point that the show will never reach the dizzy heights of its earliest story arcs, but if you enjoy the traditional shonen action formula and have stuck with the series so far through thick and thin then there's no reason to abandon it now.

6
Bleach continues to deliver everything you'd expect of it, which at times is exactly its problem - we'd love to see it subvert or exceed those expectations from time to time.
LATEST REVIEWS