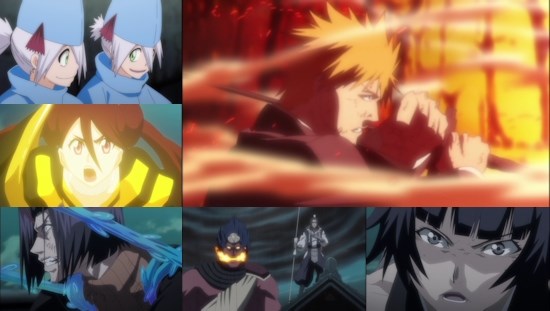 The first volume of this latest series of Bleach left us shocked to our core - it was a filler arc that was enjoyable to watch. How is such a thing even possible? Can we hope and pray for more of the same level of quality from this second volume? Well, that's what we're here to find out.

Having done such a good job of setting up its tale of a Zanpakuto rebellion last time around, that rebellion continues apace, escalating further still thanks to the apparent defection of Byakuya to their cause. This sets the scene for plenty of action early on within this episodes, as Soul Reapers take on the personifications of their Zanpakuto left, right and centre. This sets up some particularly delicious prospects, not least a face-off between Kenpachi and Byakuya, although sadly none of these battles quite reach the promised heights of their billing - still, they remain entertaining nonetheless and continue to build on the solid foundations of the previous release.

Eventually, of course, it's time for this story arc to move on to its next phase, and the discovery of rebellion mastermind Muramasa's hideout in an attempt to rescue the Head Captain quickly leads us into revelations about Muramasa's true goal - a goal in which, of course, Ichigo Kurosaki features heavily. With that information summarily stored in our minds its flashback time, as the series offers up a lengthy delve into Muramasa's past and his back story.

Such flashbacks are usually the kind of moments which kill even the best of anime series, and the fare served up by this portion of the story arc is certainly a little long-winded, but in fairness even this aspect of the series is well-realised and interesting enough unless you're absolutely desperate for more high octane action over and above building on past events to shed light upon character motivations.

At the end of this group of episodes, and with a third volume still to come, this second part of Bleach's twelfth series doesn't quite live up to the first but still has a fair amount to offer assuming you were similarly enamoured of those prior episodes - the use of anthropomorphisms of the various Zanpakuto still hasn't lost is unique lustre and provides some interesting changes to the usual template of over-powered action favoured by the series, and even a slowing down of the story in terms of raw action doesn't take too much away from that.

As is the norm for Bleach releases, this Kazé offering is bare bones but features everything that you need, with solid subtitles (save for a couple of missing on-screen text subtitles we spotted), reasonable DVD video quality and a solid English dub which works just as well as the Japanese audio.

So, this second volume of "Zanpakuto: The Alternate Tale" isn't quite as dazzling as the first, but it's still fun to watch and continues to make use of an entertaining and interesting premise. Whether it'll all fall apart in the final volume remains to be seen - conclusions are a tricky thing for a filler arc to handle, when the status quo must ultimately be retained - but if nothing else this has still been one of the more entertaining Bleach experiences of late, even besting some of the mainline story-telling it's had to offer. Not a bad way for this behemoth to see out the year in the UK, with plenty more on the way in 2014.

7
It loses a little of the spark that made the previous volume so entertaining, but this is still a rare high point for Bleach's filler and remains a fun watch.
LATEST REVIEWS