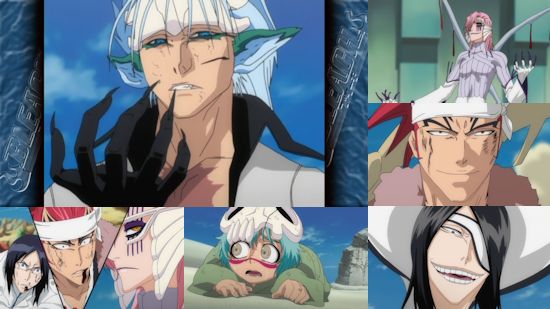 After choosing the strangest of times, and a pivotal moment in its Arrancar story, to bound off and cover an unrelated anime original side-story like a small child distracted by something shiny,  Bleach returns to the UK in 2013 with its tenth series and - thank goodness - a return to that Arrancar arc.

If you've forgotten what happened back in series eight then fear not, as Bleach is never shy when it comes to giving you a recap on what had happened previously; indeed, by this point in time the first five minutes of most episodes are taken up by re-treading what has gone immediately before.  So, having been duly reminded of the messy fate Ichigo almost met at the hands of the morose Ulquiorra, and his unlikely "resurrection" thanks to Grimmjow, it's time for Ichigo to face off against that latter rival as part of the continued, concerted effort to rescue Inoue from Aizen's clutches in the depths of Hueco Mundo.  The trouble is, it isn't Grimmjow who's the real threat around these parts...

With so many powerful enemies floating around, the first disc of this particular release is a rather depressing affair, as we spend the vast majority of it watching our heroes getting whaled on mercilessly by their respective opponents.  With all hope lost and not a single almighty shounen comeback in sight, some revelations surrounding Nel look set to be the moment that finally turns the tables.  However, it's only once we reach the second disc that things really kick into life, as Ichigo and company find themselves joined by some high-profile reinforcements who know all about how to kick ass and take names - although boy does it take some of these characters a long time to get those names.

This leaves us with a volume of Bleach that is effectively a game of two halves - the first half has no shortage of action but it quickly becomes stale; there's only so much you can watch of the characters we're supposed to be rooting for being pounded into dust before the whole thing gets a bit depressing.  Thankfully, this is countered by a strong second disc, as some of Soul Society's finest enter the fray - suddenly, the series is full of life once again, and even some of its comic turns are rather delightful compared to the repetitive fare we've been "treated" to previously.  There's nothing new to the Bleach formula here, and everything stills rolls along at a glacial pace for the most part, but hey - sometimes watching glaciers can be kind of engaging.

Technically speaking, this release from Kaze is a pretty solid one - all of the episodes previews and vignettes are present and correct where they were missing from previous releases, video quality is passable if not great and our only major irritation is the horrible way the series deals with the transition from 4:3 to 16:9 widescreen for the show, which really isn't Kaze's fault at all.  Some missing sign translations aside, the subtitles on this release are equally solid, and the English dub continues to be a mix of high points and lows while remaining perfectly serviceable overall.

After a pretty weak ninth series, when all is said and done it's simply a relief to see Bleach getting back to its main story again - something it does with no shortage of action, although only the second disc of episodes here really do any kind of justice to what the show does best.  With a little faster pacing and more pitched battles, perhaps the Arrancar arc could finally reach some of the heights previously scaled by the Bleach that we know and love.

English and Japanese stereo audio with English subtitle.  The only extras on these two DVDs are text-free opening and closing credits.

7
Bleach returns to its main focus once again, and after a rather depressing first disc we finally get to see the kind of material that makes the series worth watching.
COMMENT AND DISCUSS
blog comments powered by Disqus