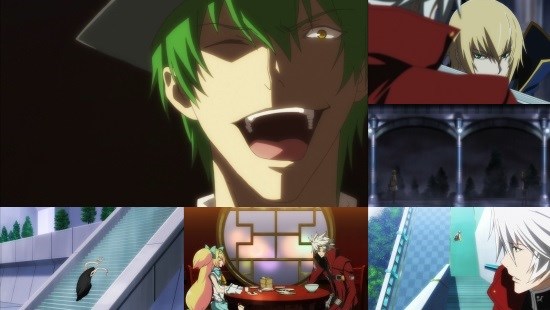 Based on the popular fighting game series; Blazblue: Alter Memory takes the stories of the first two games in the series and condenses them into a twelve episode anime. Taking place at the end of the year 2199, Blazblue: Alter Memory is set in a world where all the cities are situated on mountain tops, as the world is covered in a toxic substance known as seither. This came about due to the defeat, and eventual destruction, of a monster known as “the black beast” one hundred years prior to the events of the series. Since then mankind has developed magic and specialised weaponry which makes use of the seither. The usage of said weapons is regulated by a government organisation known as the Norvus Orbis Librarium (NOL). NOL has branches in each of the cities, which act as military bases but also hold other secrets as well.

The story of Blazblue begins with the worlds most wanted man, Ragna the Bloodedge, attacking NOL branches in each city, in an attempt to destroy the secrets contained within. The setting of Blazblue: Alter Memory is the 13th Hierarchical city of Kagutsuchi, as word of Ragna's appearance spreads more people show up in Kagutsuchi in order to claim the reward on his head and to collect a powerful magic device he carries known as “the azure grimoire”. Ragna not only has to fend off these threats but also another threat which ties into his past, and may put the whole world’s safety at stake.

From this brief synopsis you can probably tell that, for a fighting game series, Blazblue has an incredibly dense and complex story. Blazblue: Alter Memory takes this story and condenses it into a twelve episode show. Therefore many of the themes, plot points, and other elements are either glossed over or completely omitted in order to tell the core story of both Calamity Trigger and Continuum Shift (the first two games in the Blazblue series). This all makes Blazblue: Alter Memory feel very much like an anime adaptation geared towards fans of the games, who have already played through it and understand what is happening. Those who haven't played the games are going to be confused about certain aspects of the show. The series itself doesn't really explain the terms that it uses, and gives very little back story about the world and characters.

That being said in some episodes, where something is crucial in understanding the main plot, it will take time to give a lengthy exposition scene in order to make sure the viewer understands this. Blazblue: Alter Memory has a rather interesting approach to this. Through the use of characters walking up and down stairs we see them discuss various plot points of the show. The series makes rather frequent usage of having the characters walk up stairs. When not on stairs they're either having a conversation standing a few feet away from each other and shouting, or whilst eating dinner in a restaurant. These scenes become so over used that it eventually feels like some kind of intentional joke by the animators and writing staff.

As you might expect Blazblue: Alter Memory covers some fight scenes between various characters. However, the way they're presented doesn't make them feel like a prominent aspect of the show, which is odd for a fighting game adaptation. They are simply seen as the eventual conclusion to an encounter between two characters, once they've had their chat, and most of them are over relatively quickly. The action in these fights is passable but feels a bit lacking. Each of the characters has their own signature attacks from the game, but the flow of the action feels slow and is missing much of the dynamic punch that the game has. They're ok, but if you're wanting to watch Blazblue: Alter Memory for it's action you'll feel a bit disappointed.

With regards to the handling of the story and characters Blazblue: Alter Memory does a fairly decent job of condensing things down, for those who already know the main plot. The anime chooses to focus on a few of the characters from the game and each of them gets a bit of screen time. Though some only get one scene, which could disappoint fans wanting to see more of their favourite character from the game. There are also a few really odd moments thrown into the mix. The best example of which is an episode where Ragna and a few of the female characters go to a hot spring. This scene serves the plot in no way whatsoever, and screams fan service. It feels really out of place and is never mentioned again afterwards.

One of the biggest plus points of the series is the audio: The music is largely taken from the game and features remixed versions of some of the game’s tracks. Having the game music playing in the fight scenes really adds a lot for those familiar with the game already. Similarly, the English dub features the cast from the game reprising their roles (save for one or two voice actors). The dub is pretty much perfect, it gets the tone right, the characters sound as they should, and it really fits the series well.

Overall Blazblue: Alter Memory is a video game to anime adaptation that only really works for fans of the game. Newcomers to the franchise will feel lost and confused, whilst game fans will appreciate seeing the story presented in an easily digestible format such as this.

7
Entertaining for existing fans of Blazblue.