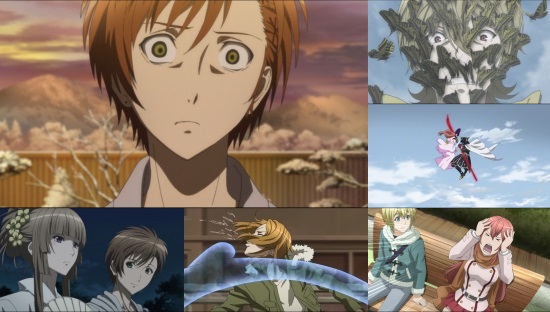 After part one's slow start and lead into a rather interesting last handful of episodes, Blast of Tempest Part 2 kicks things off with a recap episode detailing everything up to this point. The recap episode itself does such a good job of showcasing what happened in the first half of the series that it makes having watched those set of episodes unnecessary in order to watch this collection, not just for how well it goes over the details but for also drawing attention to the fact that very little from what made those sets of episodes interesting remains in part two's collection of episodes. Unfortunately from this point on the series descends into a maddeningly frustrating spiral, losing everything that was good about the series in the process. From here the series just plods along at a frustratingly slow pace where nothing notable happens and characters lose the traits that made them interesting, in turn picking up others that ruin their personalities and add some unnecessary baggage in the form of a completely unnecessary and annoying character who partakes in the plethora of pointless conversations that characters now seem to have instead of actually doing anything.

This second half of the series takes place a month after the events of part one., with the world experiencing the aftermath of what transpired with the Tree of Genesis and Tree of Exodus. Now there are trees growing all over the world, changing its dynamics with regards to crime, pollution and vegetation. Surprisingly to the audience and members of the cast the general populace have quickly accepted things for what they are, and are continuing to live out their lives as if nothing had happened. The series could have done more with its world building at this stage, but fails to further explore the attitudes of regular people other than showing the briefest snippets of news reports that are on TVs in the background. At times some of the cast will be watching these broadcasts, which strikes up a conversation that lasts all of two seconds before they need to move on to more important matters: Relationships.

Now that Hakaze has made it off the island she spends most of the time dealing with a much greater issue than escaping isolation to prevent the end of the world - unrequited love. Hakaze now spends her time being conflicted with her growing feelings of love for Yoshino, believing that he still has a girlfriend and feeling extreme guilt over her feelings which lead the way into some rather odd scenes which are meant to be comedic in tone yet feel rather forced due to the juxtaposition between how Hakaze is currently acting and how she was shown previously. At times her actions are so grating that it doesn't even seem like this is the same person from part one! This brings us to another issue present with most of the cast - those who had smaller roles are given more screen time and focus while the main duo of Yoshino and Mahiro are divided and pushed to the sidelines in favour of other characters. This wouldn't be a bad thing if the other characters who steal focus actually did anything noteworthy, but instead they spend most of their time debating issues that don't even matter in the grand scheme of things and coming up with odd hypotheses that amount to nothing. The "high" point of this is when a full episode is spent with most of the cast trying to guess the identity of Yoshino's girlfriend - again, this scene is meant to be played for laughs but it fizzles out due to how dense every single character seems to be. The climax of this exchange is a rather obvious one that just leads the way into yet more forced comedy.

This addition of more comedic scenes simply does not work, as the jokes fall flat and revolve more around character drama and interactions rather than focusing on the situation at hand. It's as if the series didn't know what direction to take after part one's climax and just messed around until it stumbled upon a way to end the series. The way in which it does this is by introducing a new character who somehow manages to be incredibly annoying yet at the same time the character who actually talks the most sense. The individual in question is given far too much plot importance for such a late addition - it wouldn't be so bad if most of his dialogue didn't involve him screaming or complaining. He does have a few moments when he manages to say what the audience is thinking but again these scenes also have characters in the show reacting to these thoughts which don't end well, resulting in more screaming and complaining about how another character has acted.

Thus, the characters spend most of their time talking about nothing rather than doing anything. This means that there are very few action scenes, and those that are included somehow don't reach the level of spectacle that the first collection of episodes did. This is mostly due to how the new character uses his magic, consisting of projectile-like attacks that don't involve any of the strategy or finesse displayed in the first part. Most of the time it's also the same two characters who are engaged in battle, most of which revolve around fighting against the tree's defences that have appeared. The series does end with a climactic battle but the conclusion to it feels rather forced and unjustified. There seems to be no threat or consequence given to events, making it hard to care for what is happening on-screen. In fact, this basically sums up the second part of the series - there just seems to be no reason to care about anything. The characters have gotten worse, there's no sense of threat or urgency and the character's conversations have no meaning. There is only one aspect that is properly handled and that is the discovery of Aika's killer, and even here unfortunately the need to discover it crops up again out of nowhere and only lasts the best part of two episodes, making it a very slim glimmer of enjoyment washed away by a deluge of tedium.

Blast of Tempest's second half quickly devolves into a bumbling mess of a show, with a rather disappointing set of episodes showcased at a rather plodding pace. It's a real shame, as part one ended on quite the high note that promised greater intrigue than what it ultimately displays, making this volume a huge disappointment and a waste of so much potential.

4
A disappointing second half and conclusion to the series that wastes all the potential the first half spent most of its time generating.
COMMENT AND DISCUSS
blog comments powered by Disqus