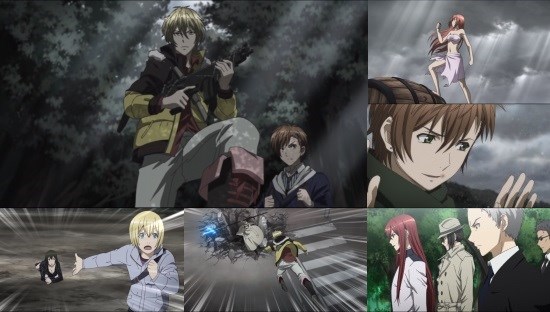 After being trapped on a deserted island, sorceress Hakaze Kusaribe sends outs an SOS in order to prevent the end of the world. The message itself is discovered by an unlikely pair of high school boys who are now the only ones capable of helping Hakaze prevent the destruction of the world by the hands of her family, a powerful group of mages who wish to revive the “Tree of Exodus”, believing that it is the key to stopping the world's destruction. The high school boys in question are Mahiro Fuwa - whose main motivation for helping Hakaze is that she'll use her magic in order to discover who is responsible for the death of his sister in order to exact his revenge upon them - and Yoshino Takigawa, who is Mahiro's classmate and friend but was also secretly dating his sister. In order to prevent the revival of the tree of Exodus, Hakaze leads the pair to locations containing artefacts holding magic which will allow them to fight against the Kusaribe clan and stop their ambitions.

Blast of Tempest takes a few cues from Shakespeare, making quite a few subtle and overt references to two of his plays, these being The Tempest and Hamlet. While Hakaze embodies the former play as a magic user stuck on a deserted island, Mahiro is the biggest reference to Hamlet, being that his main motivation in the series is revenge for the murder of his sister. While characters fill in roles that echo those of each play there are also specific references made to them, which mostly take the form of characters quoting lines from Hamlet or commenting how their given situation is reminiscent of a part from the plays themselves. There is a lot of talk about fate, chance and coincidence and how it ties into the current situation the characters all find themselves in.

The best example of this and probably the highlight of this collection is a debate that spans over the course of several episodes near the end. The debate in question is a discussion on the consequences of certain actions, what steps to take in order to achieve certain goals and to also trying to convince one of the characters to take a certain side in the conflict regarding the Tree of Exodus. While this part of the series is extremely interesting, showing not only the character's personalities, dynamics and making use of the magic in the series, it needed a lot of set up from earlier in the series to get to this point. This in itself is the main problem with Blast of Tempest - tt takes too long to finally grab the viewer's attention and make them care about the characters and its world.

Before this point the show focuses on a few other aspects, the first being the relationship between Mahiro, his little sister Aika, and Yoshino. As stated previously, Mahiro's main motivation is tracking down the culprit responsible for Aika's murder that took place a year prior to the current events of the series, and it is quickly established that Mahiro has very little interest in saving the world and is only collaborating with Hakaze in order to get what he wants. From the outset it makes Mahiro a character that is very hard to like at first due to the fact that his motives show his lack of interest in anything not regarding his sister and exacting his revenge. For Yoshino most of his scenes are back story, showing his secret relationship with Aika - however, when he is not reminiscing he is the character that takes the most interest in what is happening in the world. Although most of his efforts to stop things are in vain due to the situations at hand., most of which occur when the pair run into members of the Kusaribe clan and have battles using magic.

The magic in the show itself is actually a rather interesting device with clearly defined rules. Magic is not used offensively, but by manipulating it's properties to a given situation attacks can be made. The use of this magic requires an offering of civilisation to be made to the tree of genesis, meaning users are able to fuel their magic by offering cars and various other items that are scattered around. For Mahiro and Yoshino they require the help of special items imbued with Hakaze's magic - once the item has been used a certain amount of times it will break and vanish, meaning that for these non-magic users of the show magic is rather limited and its application needs careful consideration before usage. For the most part magic is used defensively by creating barriers and using spells that allow the users to move at high speed in order to land quick attacks - this adds a certain dynamic to action scenes in the show where characters will be making flashy moves and trying to take advantage of their opponents mis-steps., making these scenes rather fun to watch as no one side has a clear advantage over the other in terms of ability; it's down to resourcefulness and tactics that determine the outcome.

While the series does have some interesting ideas, there are a few things that let it down. As mentioned previously it takes a while to become invested in the characters due to how much emphasis is given to one aspect of their personalities at first - Mahiro is too obsessed with revenge and the series focuses too heavily on Yoshino and Aika's relationship, which in all honesty feels really flat and dull. Also, there isn't really all that great a sense of peril due to how the end of the world aspect is handled - in the series butterflies turn up and everyone turns to metal suddenly, and the only survivors in the area are the shows main cast due to being immune to the effects of this thanks to their magic. This in turn makes the world feel rather barren and lifeless, making it hard to care whether it is saved or destroyed. It is not until around eight episodes in where everything falls into place and things finally start to make sense. In that regard it takes a rather long time for the series to find it's feet and grab the viewers attention. When it does find it's footing it holds on for dear life and actually provides an engaging watch that manages to do enough with the concepts, ideas and characters it took so long to establish.

7
A show with a few interesting ideas that manages to keep viewer's attention long enough to find its feet and deliver a satisfying pay-off.