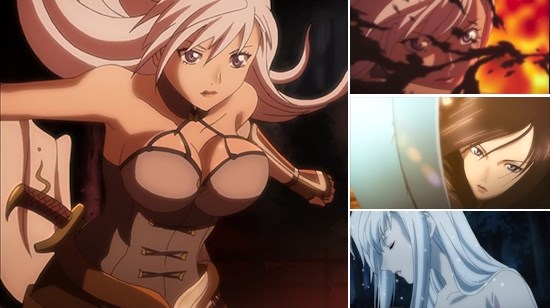 This season sees the launch of the latest anime based on a video game - whilst these have been very hit and miss in the past this one shows some promise however, partly due to the fact that it’s based on Korean MMORPG Blade and Soul. MMORPGs generally have a lot of world building elements to them which can lend themselves nicely to adaptation, and as the game hasn’t left Asia since its launch in 2012 western audiences have the added benefit that we can go in totally cold without any expectations based from the game.

Blade and Soul follows the story of Alka, a deadly assassin of a sword clan. Prior to the series start she has failed in her sworn duty to protect her master, who was killed by minions of a growing empire. Alka now travels both to escape capture and also to prepare for the chance to take her revenge. Whilst her social skills are severely lacking people are drawn to this near-silent warrior, both as her champions and as her hunters who recognise her from her butterfly-shaped birth mark. Across these first three episodes Alka is pretty much a solo character as she moves around quite a bit.  The villain of the piece, Jin Valel and her colourful minions, pop up here and there alongside bar owner Karen and wily merchant Ron, but only in small cameos here and there. Gunslinger Hazuki is the solid bet to become a lead in the series and also its primary comic relief, offsetting her deadly accuracy with her general drunkenness and happy-go-lucky attitude. Thus far the characters are a colourful and fun bunch, but with the series plot only really starting to get going by the end of the third episode it’s too early to say exactly how things are going to fall into place.

At first glance, Blade and Soul looks like the latest in a series of fantasy fighting women shows which have been coming fairly regularly thanks to the popularity of Ikki Tousen and Queen’s Blade. Unlike the majority of these series however (and surprisingly given the pedigree of GONZO), things are played a little more seriously here. Whilst there are comic interludes - and yes, all the women wear relatively little and have cleavage you could ski down - the series itself is much more interested in the combat than the fan service. Alka will happily chop people into little pieces in some great action sequences, but the usual Blu-Ray removable steam and clothes ripping that similar series usually employ are absent here. Indeed, it’s the action that really sells the series as the taciturn Alka doesn’t really have the charisma at the moment to keep the momentum going in dialogue or comic scenes, but once the blades are drawn she really lets rip. Once Hazuki enters the fray to hunt her down for a sizable bounty things get even more fun as the sword versus gun combat proves surprisingly evenly-matched and graceful, albeit conveniently interrupted every time one of them might be gaining the upper hand.

Visually the series looks great - GONZO may not be bringing their A-game here but its pretty close. The character designs are somewhat derivative but have been worked with enough to be fun and work well in both action and more sedate scenes. It helps that there is little evidence of the series' origin as a game to get in the way with only the odd member of a different race turning up here and there, helping Blade and Soul to not feel like it’s been tethered to the mechanics and design of the original. The only real let down is the animation for the closing credits, which features a poorly done CG model of one of the characters and a fairly slow song which, frankly, looks dreadful.  The voice cast do a great job however, with everyone seeming to have a lot of fun - it’s particularly gratifying to see Sora Amamiya giving such an energetic performance as Hazuki which is a total 180 from the quiet, understated performance she’s giving as Fujimiya in One Week Friends (also airing this season).

I like Blade and Soul quite a lot, in spite of its utterly unoriginal plot and paper-thin characters. The energy of the show really carries it through and the decision to cut back on the fan service for a more action-based show that doesn’t pause every five minutes to flash some underwear at you feels like a breath of fresh air. I’m going to go out on a limb here and say that Blade & Soul is going to be a consistent series this season - I’m not expecting a big twist to suddenly make things incredible but I’m not expecting it to stop being fun at any point either. It’s certainly worth watching a few episodes here and there inbetween what are likely to be the more stand-out shows this season.

You can currently watch Blade and Soul in streaming form on Crunchyroll.

7
Brings the fighting girl genre back down to earth.