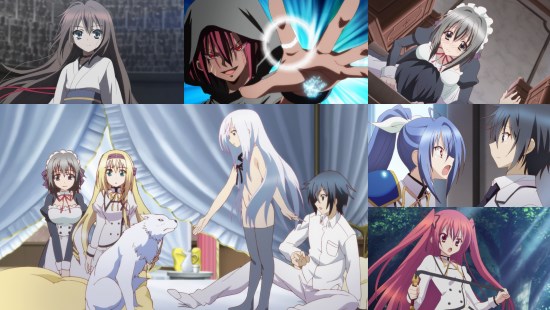 The phrase "dance like nobody's watching" is a well-worn piece of advice, and one that Blade Dance of the Elementalers has perhaps taken too literally. This is a show that seems certain that nobody is watching, so puts practically zero effort into anything that it does as a result.

Indeed, much of the series could be summed up by the first scene after the opening credits in episode one. Our protagonist stumbles across a naked, bathing girl and then manages to offend said girl as well as embarrassing her, all of which leads to her using a fire-based power to attack him. Not being particularly proficient in wielding this power, she almost ends up doing more damage to herself than our male interloper, which leads to him having to leap in to save the day and rescue her. Rinse, repeat and change the backdrops and you've just watched a large swathe of this series.

Anyhow, let's put some meat on those bones. The protagonist in question is Kamiko Kazehaya, a true oddity in this world of elementalists - he's male, in a world where the only ones capable of forming contracts with spirits and taming their powers are traditionally pure, unsullied maidens. Even though he hasn't used his powers in anger for some time, Kazehaya is nonetheless invited to join Areishia Academy, invited by the head of this spirit knight institution for one reason - to take part in a Blade Dance, a tournament amongst elementalists which provides rich rewards but also attracts some unwanted individuals into its ranks.

So, Kazehaya enrols at the school where he finds himself placed in amongst the academy's troublemakers, some of whom carry difficult emotional burdens much as our protagonist carries a hidden past of his own. With threats bubbling of a successor emerging to the world's defeated demon lord however, any personal problems will have to be laid aside for the greater good it seems.

If you're looking for a frame of comparison for Blade Dance of the Elementalers, the most obvious series to pull up alongside this one is Infinite Stratos - the concept of a world where girls are the sole wielders of power but for a single male exception, who of course becomes the centre of various harem shenanigans, matches perfectly. However, as flawed as Infinite Stratos is, it's a far more accomplished, polished and downright entertaining series than Blade Dance of the Elementalers ever manages to prove itself to be.

The problems with this series are numerous, even in comparison with that flawed rival. For starters, Kazehaya is a frustrating character on almost every level as he flip-flops between pervert and milquetoast lead and similarly seems to switch between being a hapless participant in events until, when the story demands it, he proves himself to be the only one capable of saving the day. By the end of the series practically all of the agency has been stripped from the female cast around our lead, reducing them to simpering wrecks whose sole purpose is to fling themselves at Kazehaya before the final episode and the Blade Dance itself necessitates that they do something other than bicker over him (or at him) ceaselessly.

This in itself isn't necessarily an insurmountable issue - you can make a fun harem anime even with a lead male character you want to throttle sometimes, as numerous shows from Tenchi Muyo onwards have proved. Unfortunately, all this series manages to do is lift tired old ideas from those numerous other harem shows and roll them out in a half-baked and far from satisfying fashion - scenarios and jokes are telegraphed a mile off, and there's frequently more fun to be had from shouting out the punchlines before the character does than watch them play out in fullness. This is only made more frustrating by one point early in the series where it looks all set to break that mould - a character plucks up the courage to kiss Kazehaya and thus lift the veil on her feelings for him, yet what should be a seismic event for the relationships between the cast members of basically relegated to a throwaway joke and otherwise largely forgotten.

But hey, who cares about the story when you can watch all these beautiful girls romping around in short skirts, right? Unfortunately, even if you come at Blade Dance of the Elementalers from this angle (a low angle, naturally...) there's nothing for you here. This show looks cheap. Very cheap. Character designs are easily recognisable but somehow ill-fitting for the series they slot into, and the animation quality is only impressive in terms of how consistently poor it is. To be fair, production studio TNK do at least get to grips with how to make some of its action scenes look mildly cool from time to time as they figure out how to do a lot with a little, but that only succeeds in reminding the viewer just how ham-fisted the rest of the show looks.

There's no English dub for the series, but its Japanese voice cast do as good a job as they can with such dull scripts and dialogues, and the soundtrack is inoffensively forgettable aside from half-decent opening and ending tunes attached to the series. We checked out the show on Blu-ray, but given our comments on its production value you probably wouldn't miss much if you plumped to watch on DVD - nonetheless, we had no qualms with the video quality or subtitle presentation here. If you really want more of the series, six mini-OVA shorts are also included here, featuring various side stories around the characters of the kind you might expect from this sort of show.

It's tempting to sum up Blade Dance of the Elementalers as "lazy", but more to the point it's simply lifeless - a dyed in the wool harem series can still be fun or give you characters to gravitate towards, but this show singularly fails to achieve either of those objectives. With a story that's a trifle, characters that are barely deserving of the word and low quality animation, you can do much better than this if you're looking for a series within this genre.

3
Its blade is blunted and it keeps falling over its own feet - there are plenty of much better harem action shows out there.
LATEST REVIEWS