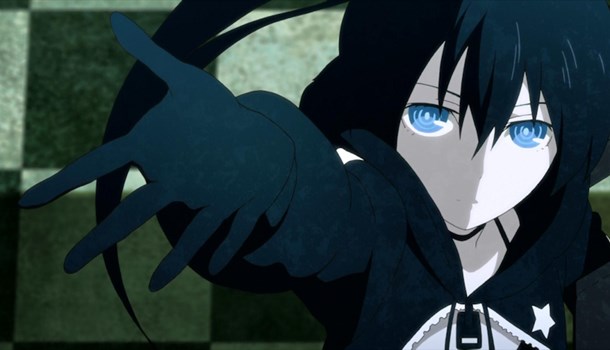 It's hard to believe that not too long ago the only way that the average western anime fan had the opportunity to see a new production at the same as it was released in Japan was either by resorting to illegal fansubs or investing in Japanese lessons and importing said product. Although nowadays it's possible to see a series online via streaming sites like Crunchyroll, we still seem a long way from getting a simultaneous release of anime on DVD. However, B★RS Project have given us this rare opportunity via the release of their Original Video Animation preview of the planned official release of Black Rock Shooter later this year.

Intriguingly, the history of this fifty minute OVA stems from the titular song "Black Rock Shooter", as sung by virtual star Miku Hatsune of Vocaloid fame. The song resulted in a flood of fan created artwork, followed by an ever increasing range of figures released by Japanese outfit Good Smile Company that have subsequently captivated a veritable horde of new fans.

The plot of the OVA itself seems to randomly cut back and forth between two at first seemingly different story lines.  The first of these is a slice of life school story, following Mato Kuroi, an honest if tomboyish schoolgirl, and her life and growing friendship with her more demure class mate Yomi Takanashi.  The second however is set to a macabre landscape, with our titular heroine Black Rock Shooter either surveying the dark, broken and altogether unfriendly landscape or fighting against the apparent ruler of the island, Dead Master.  A ruler who bears an all too uncanny resemblance to Yomi...

Although these two storylines seem as separate from one another as night and day, by the end it's clear that these two separate worlds are more closely intertwined than we first thought.

The problem with the way this story is told however is that, even when the final credits start to roll, I still couldn’t tell for certain whether it had ended, or whether there was more to come (imagine LOST's time jumps and you'll get the general idea) - in fact I had to re-watch the whole thing a second time to make sure I hadn’t missed anything... not that that's necessarily a bad thing to do though.

The animation however, while not up to, say, Kyoto Animation's level of detail, nonetheless was brilliant.  That said, while it did a sterling job of creating dynamic action scenes and well detailed and coloured environments, I couldn't help but feel that that at times the animators could have gone that extra mile to improve on it, with the artwork at times seeming either too flat (in the case of the real world scenes) or simply too abstract (in the case of the other-worldly moments).  What struck me also was the fact that this OVA has, instead of the normal Japanese audio only, an additional seven languages (including English) to choose from - do you get the feeling that they were hoping to entice more than just mainland Japanese anime fans?

My main problem with this OVA is more to do with its release plan - considering it has seven different subtitle tracks the DVD has only (to date) been given away via a few Japanese hobby magazines, making it difficult at best for said western fans to gain access to it.  Although B★RS Project did promise to stream the OVA online via their web site, the movie has since been replaced by a teaser trailer.

The question is then, with a full series rumoured to be in the pipeline for 2011, and plans to release this OVA as both a Blu-Ray and DVD/Blu-Ray "combi pack" in December 2010, who is this OVA targeted towards?  Is it expressly targeted at fans of Vocaloid in the same way as Bandai's releases of Gundam models?  Is it going to be accessible to a more mainstream anime audience who may not have heard of, or even get, the Vocaloid reference?  Will it even be considered for a western release or are the OVA's producers instead releasing it only in Japan and expecting western fans to trump up the export costs?

Overall, to this reviewer I suspect that Black Rock Shooter is going to be a Marmite release – for every person who likes it there will be others who hate it.  Myself though? While an entertaining fifty minutes, it was hardly enough to make me jump out of my seat.  As for you yourself, the reader - let the buyer decide is all I can say.

As mentioned in the review the only way currently to see this OVA legally is from buying certain Japanese magazines.  These are:

These releases are all available from good import suppliers, subject to availability.