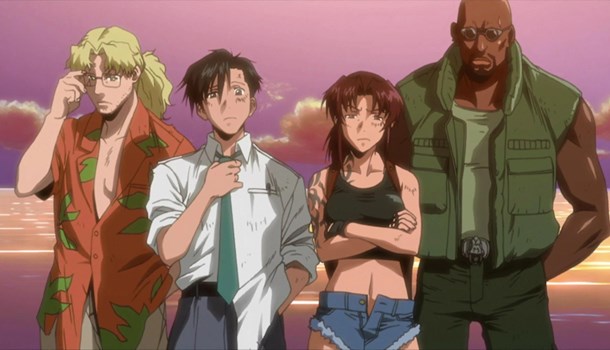 I am a right grumpy git recently. Perhaps it has something to do with being 24 but Black Lagoon seems to soothe the angry and stressed part of me preventing me from going absolutely postal. So when I see Rock go ape and finally speak his mind, only then do I realise that even though this bloke is entirely fiction, I truly respect and envy him. Some of the stuff this bloke puts up with... well, it’s not a surprise he snaps on the level that he does. I wish I could be that cool and yet that nerdy.

A brief synopsis of the kinds of things you can expect from this volume full of action in the South China Seas, in no particular order:

- Ample measures of female bad tempers,
- Wannabe Nazis and associated Nazi paraphernalia,
- A run in with the local law enforcement officers (yes, they do have them in such a lawless country),
- A small orange orang-utan toting an AK-47,
- A semi-severe head wound caused by bullets,
- Nuns with guns (extremely large guns as a matter of fact),
- Columbian Mafioso with the wrong accents,
- And a French Maid with a very large gun.

With all these unique themes aside the story remains as gripping as ever with the relationship between Revy and Rock getting all the more complex and convoluted (and in Rock’s case, life threatening as he barely avoids losing a large portion of his skull).

The show continues to be compelling and simply stunning and frankly, I would not change a thing. I just want more as it seems to settle my stressed mind oh so much. Just don’t watch it while playing GTA4, the end result is a bit weird...