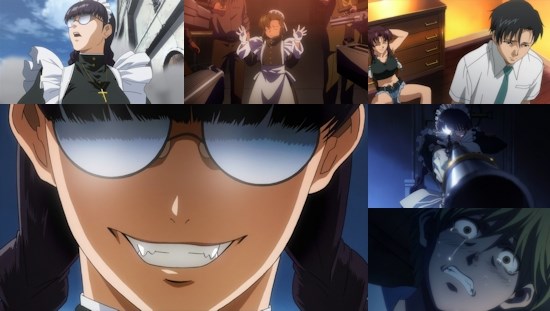 While the popularity of some anime series within western fandom can be contentious (it's best to wear some kind of protective headgear when discussing Attack on Titan or Sword Art Online, for example), some shows are almost universal in the popularity that they enjoy. Along those lines, it's hard to find anybody with a bad word to say about Black Lagoon, and rightly so - this is a series that knows how to dish out sizzling action with one hand and carefully crafted characterisation with another.

With two full series under its belt, fans have been left hungry for more, and just as we were about to reach the brink of starvation so Kazé have - belatedly - saved us from having to gnaw on our own limbs with the release of Roberta's Blood Trail, a five-part OVA which continues on from the end of Second Barrage.

As you might expect, the key to this OVA's story is mercenary-cum-maid Roberta, whose quiet reverie working for the high-profile Lovelace family is shattered by an assassination attempt instigated by American Special Forces. With her employer - and more importantly the father of Garcia, upon whom she cherishes - dead, Roberta's mind immediately turns to revenge, and what better location to mete this out than the lawless city of Roanapur. However, Garcia has no desire to see Roberta return to the vicious wolf of her past, and thus sets his own plan into motion to stop her - a tall task, as Roberta's fragile psyche looks set to shatter at any moment.

However, although it's her name on the title, in a sense Roberta's Blood Trail is really Rock's story - having been deeply affected by events in the show's second season, Rock is a changed man having seen his attempts to help or save those around him fail utterly, leaving him despondent. When Garcia turns to him to mastermind a plan to save Roberta however, he sees it as an opportunity to redeem himself in his own eyes, throwing himself with gusto in the darkest recesses of Roanapur to bring his plot to fruition. Such is Rock's desperation to save someone, anyone, to validate his existence that he's willing to pursue any means no matter how dangerous or damaging in the belief that they will be justified as long as he gets results.

The biggest issue that these episodes face in light of the name headlining the series is that there's a clear expectation that this will be a tour-de-force of insane action. While Roberta's Blood Trail certainly knows how to get the bullets and blood flowing in spectacular fashion when required to do so, these episodes as a whole actually take a slower, more cerebral approach to building its story, with a slow build-up and progression that occasionally threatens to stall but manages to keep things moving by focusing intently on the show's characters, their history and how those pasts affect their current choices and decision-making. For long-standing fans of Black Lagoon, this offers no end of fascinating moments of dialogue, with Rock and Revy again taking the centre stage as their relationship endures further shifts, while also fleshing out a number of other characters in terms of both their motivations and the bonds that tie them (often uneasily) to other characters.

For this review we received the UK Blu-Ray release of the series, an affair entirely free of extras and provided on a single disc. Unlike some other Kazé releases we have absolutely no qualms about the subtitles available here, which are effectively flawless, and video and audio quality are both strong. Indeed, in broader terms this is perhaps Black Lagoon at its best looking, freed to some extent of the time constraints of producing a TV series which affords it a little more detail and fluidity as it relates its story. It isn't an incredible visual spectacle but it's certainly very accomplished and effective at everything it sets out to do. As per its two preceding series, both the Japanese and English voice casts do a superb job of bringing Black Lagoon's larger than life cast into being, so regardless of your language preference you'll be well-served here.

Overall, Roberta's Blood Trail is an enjoyable and fascinating addition to the Black Lagoon story in animated form - it isn't quite the high-octane, mile a minute offering that its title might suggest and as a result it's rather a slow burner of a story that may frustrate the action die-hards, but if you have the patience to sink into its world and scenario then you'll be greatly rewarded with further insight into much of the show's main cast. Even then, the show still punctuates its story with the kind of brutal, blood-stained action we've come to expect of it, ensuring that there's something for everything facet of the show's fan base - perhaps it could be a little shorter or more focused, but there's still plenty to enjoy here and Roberta's Blood Trail has, ultimately, been well worth waiting for.

Nothing to see here, with this release containing solely English and Japanese stereo and English 5.1 audio with English subtitles.

8
It isn't as action-packed as you might expect, but Roberta's Blood Trail is a considered and fascinating piece of character-driven drama that doesn't forget to let the bullets fly from time to time.
LATEST REVIEWS