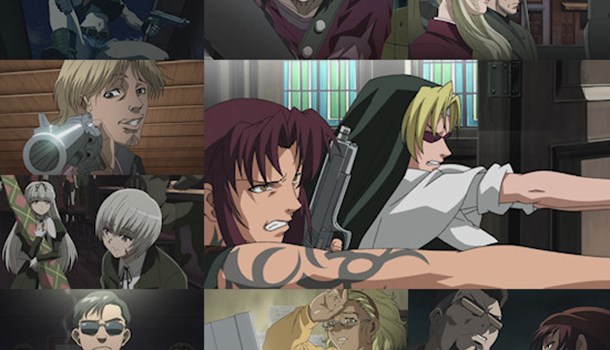 Having lavished praise upon the first series of Black Lagoon as it luxuriated in all of the benefits afforded it by its UK Blu-Ray release, we could barely wait to sink our teeth into its second season, subtitled The Second Barrage.  That is, sink our teeth into proverbially.  Don't bite into Blu-Ray discs people, it doesn't do them any good at all.  Besides which, they taste horrible.

Anyhow, I digress... as we rejoin the crew of the Lagoon Company as they continue to make a home of the corrupt and filthy town of Roanapur, something is amiss even by the region's impossibly lawless standards.  It seems that someone, somewhere has taken it upon themselves to start taking out members of the all-powerful Hotel Moscow mafia organisation, and needless to say this turn of events is the talk of the town.  As the killings spread into other organised criminal organisations, it's clear that something has to be done, and that something is only ever likely to involve an ever-escalating cycle of violence.

As our focus shifts more fully towards the culprits of these crimes, we enter territory that is truly dark even by Black Lagoon's standards in a tale which tales in all of the darkest elements of the human condition.  While previous story arcs within the series are satisfying to watch with your brain detached as simple action fodder (although you'll miss some of the show's nuance if you do do), you simply can't do that here - in short, this particular story is one of the most harrowing things I've ever seen depicted either within or outside of anime, and any glee at the gunplay and bullets flying is quickly replaced by creeping unease and outright horror at the situation its main players have been forced into.  Unsettling though it is, it's a testament to Black Lagoon's incredible quality that it can evoke such strong emotions by creating such a horrendously memorable story, proving absolutely that there is more to this series than "girls with guns" or action without any other merits.

From here, the remainder of The Second Barrage takes on a couple of additional story arcs, the first of which is a more light-hearted (although I use that term loosely) tale of an ace counterfeiter as she goes on the run from her paymasters and inevitably ends up in the care of Lagoon Company, courtesy largely on account of "nun with a gun" Eda's money-making machinations - after the pitch black nature of its earlier episodes, this return to "normality" with a new batch of larger than life characters is a welcome and well-paced break to lighten the mood of the series.

With that done and dusted, we move into the final act of the series, with the entire second disc seeing Rock return to his native homeland of Japan to act as interpreter for Balalaika.  This sees Rock, and by extension Revy, caught in the middle of gang warfare as Hotel Moscow wades into the midst of a Yakuza turf battle with their usual lack of restraint - a conflict in which Rock becomes personally invested as he sees a young schoolgirl named Yukiko becoming embroiled in the darkness of the underworld due to her heritage.  Once again, aside from providing some fantastic action scenes and memorable characters, it's the story-telling and character development that really stands out here - the relationship between Rock and Revy again has a subtle but intense focus, while Yukiko becomes a cipher for Rock's own subconscious desires and worries as he sees her on the brink of falling into a similar scenario to his own.  It's a refined, expansive and ultimately dark finale to the series, and a fitting note on which to end the show prior to its return in the Roberta's Blood Trail OVA which should reach our shores next year.

As per the first season, The Second Barrage looks great on Blu-Ray, with a clean and colourful upscale removed from perfection only by the aliasing apparent in some scenes which don't make the transition to High Definition quite so cleanly.  The Japanese stereo audio track is also crystal clear, with the English dub less so despite being a very good dub - it seems improved over the first series but still sounds very much like it's been recorded in a small cupboard.  Whether this is enough to make existing DVD owners upgrade to this version is a matter of taste, especially given the complete lack of extras on this release, but for newcomers to Black Lagoon there's no doubt in my mind that this Blu-Ray release is the version to plump for to enjoy the show to its fullest.

In terms of the series itself, The Second Barrage takes everything that the first season of Black Lagoon achieved and takes its depictions of the criminal underworld even further, managing to create a series that is both arresting and emotionally vibrant, filled with characters which are cartoonish but still palpably believable as living, functioning humans.  It's an impressive trick to carry off here and there, but when a series manages to do it consistently over an entire series with an unerring level of success it's the hallmark of an outright classic.  Where season one of Black Lagoon is fun to watch from start to finish, The Second Barrage is something of a different beast - still entertaining and action-packed, but with a staunch refusal to shield you from the darkest aspects of human life which can make it difficult to stomach, but which ultimately marks it out as an intelligent and important work of story-telling in its own right.  If you can embrace that seemingly hopeless darkness, you'll be richly rewarded indeed by this must-see series.

10
It's almost unbearably dark in its treatment, but if you can stomach its depressing fare this second series of Black Lagoon is entertaining and powerful in equal measure.
LATEST REVIEWS