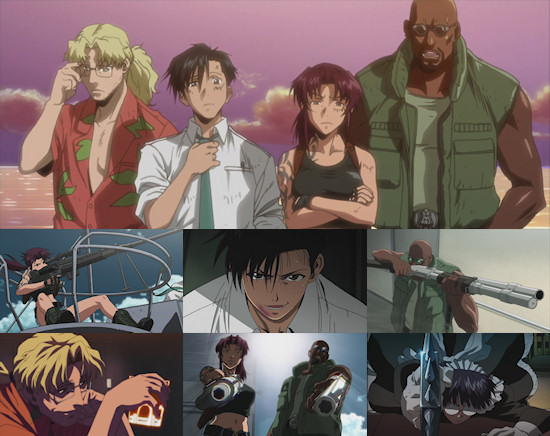 It might have been delayed a few weeks in comparison to Kazé and Manga Entertainment's re-release of Black Lagoon on DVD, but sometimes the best things come to those who wait - is that the case for this shiny new Blu-Ray edition of the show's first season?

For those who aren't already familiar with the show, this Madhouse produced adaptation of Rei Hiroe's manga series introduces us to its grubby, tarnished world via Rokuro Okajima, a low-ranking Japanese salaryman who sees what should have been a relatively pleasant business trip go south when the disc he's transporting becomes the object of attention for a group of unruly pirates.  If losing the precious disc and its contents wasn't bad enough, Rokuro finds himself taken hostage on the spur of the moment by one the pirate ship's crew in the ill-judged hope of extorting some ransom money for his safe return.

Unfortunately for his captors, Rokuro's company really couldn't care less about his safety, and what's more they're willing to do anything to stop the contents of the stolen disc getting into the wrong hands.  Such is the wealth at their disposal, it seems that the crew of the Lagoon Company are about to meet a sticky end before Rock (as he becomes known by said crew) comes up with an ingenious plan to save their collective bacon.

With his career in tatters and little to coax him back to his homeland, Rock uses the aftermath of this incident to join the Lagoon Company outright, joining forces with boss of the group Dutch; hacker and electronics expert Benny; and most notably the gun-toting, jean shorts-sporting Rebecca, or Revy as she prefers to be known.  So begins a series of ridiculously overblown, high octane and larger than life adventures, as Rock gets thrown into the midst of everything from tackling a neo-Nazi group over a stolen painting through to running from a killer maid who seems to resemble the Terminator in a frock.

Perhaps the first thing you'll notice about Black Lagoon is that it doesn't do anything by halves - every episode and story arc is a bombastic, foot to the floor and frenetically paced adventure that nary puts a foot wrong from beginning to end.  The series oozes cool from every pore - both its main collection of anti-heroes and the rivals they comes up against are superbly brought to life, and the when it comes to providing action there are no shortages of mass shoot-outs, car chases, pithy one-liners and explosions to either take your breath away or leave you grinning at the wanton destruction laid out before you.  It's utterly engaging and compelling throughout, and you'll be hard pressed to find a greater action-laden thrill ride in the anime archives than Black Lagoon as it leverages Hollywood and plunders it in the name or creating something thoroughly fantastic.

Yet take a step back from the smell of gunpowder and burning materials and there's a lot more to Black Lagoon than a simple, dumb action series.  For starters, the show doesn't shy away from or try to soften its handling of contentious issues, particularly in the case of racism, World War II and neo-Nazism as depicted by the third story arc offered by the series as it runs the line between causing offensive and realism (or at least the closest Black Lagoon cares to venture towards realism).  Even more importantly perhaps, the series doesn't just use its major characters as cannon fodder or as someone to hold a gun, and as this first season progresses we not only become attached to these characters but also the bonds which bind them.  This is particularly true in the case of Rock and Revy - it would have been easy to play this pairing off in an overtly romantic fashion, but instead Black Lagoon depicts the shifting and evolving relationship between the two of them in a far deeper and more thoughtful way.  Revy in particular stands out as an incredibly well-written character as we dig beneath her abrasive, gun-toting and impatient surface to find a whole gamut of otherwise hidden or disguised emotions.

The fact that Black Lagoon delivers a series that you can discuss on two entirely different plains - the "did you see that bit where..." pub conversation on the one hand, and a more cerebral and considered deconstruction of its characters and their circumstances on the other - speaks volumes about the quality of the twelve episodes that make up this first season.  Here is a show that you can not just enjoy for its action and the insanity that it brings to the table, but also one that allows you to appreciate and either empathise or sympathise with its characters, no matter how larger than life they might be or how dark their circumstances might reveal themselves as.

Now that we've discussed and confirmed that Black Lagoon is a fantastic anime series, what of this Blu-Ray release?  For starters, we should probably mention that this series wasn't animated natively in High Definition, and thus this release is a 1080p upscale as a result - thankfully, for the most part it looks great, with a clean and colourful transfer free of all of the issues inherent in the usual NTSC to PAL DVD transfer you might have seen previously.  The only real complaint here visually is that some scenes upscale less well than others, and chances are you'll spot some scenes that look aliased to some degree or other - this can be a little distracting on occasion, but thankfully such moments are the exception rather than the norm, and tend to be typical of many upscaled anime releases of series from this era.

In terms of audio, all audio tracks are presented in stereo - the Japanese language dub sounds fantastic as is wonderful throughout, while the English dub is one of the better examples of top-notch voice acting.  That said, the recording quality of the English dub is really quite poor - while the Japanese audio sounds natural, the English recording sounds, well, like a dub, and one that was recorded in the director's bedroom closet no less.  This muffled and slightly echoing sound destroys a lot of the immersion of the series, and for that reason alone I'd heartily recommend sticking with the Japanese audio track.

Finally, let's mention the extras included across the two Blu-Rays which house this first season of Black Lagoon - there aren't any.  None. Nada. Zero.  Indeed, there isn't even a need to include textless opening and ending credits, as there are no subtitles over the opening credits and the ending theme is instrumental anyhow.  It would have been nice to have seen something to add a little value to the series itself in terms of extras, but you can't have everything I suppose.

Ultimately, and even discounting its second season for the purpose of this review, Black Lagoon is a brilliant work - visually engaging and fantastically action-packed as it goes about everything at top speed and with no shortage of over the top flourishes.  What really makes the show resonate beyond that however is its skilful writing and characterisation, which lifts the series out of the realms of "good action series" and onto another plain entirely as a modern classic.  It's bloody and resides in a dark place, but it's not far short of a work of genius.  In terms of this Blu-Ray release, some existing owners of the series on DVD might not want to shell out for this upscaled version when they could simply stick those DVDs in an upscaling player, but big fans of the show or newcomers to the world of Roanapur will surely appreciated getting to see that world in a new and decidedly great-looking light, and it's a treatment that the series undoubtedly deserves.

9
A fantastic roller coaster ride that hides intelligent story-telling and characterisation beneath its loud exterior, Black Lagoon is something of a modern classic that deserves all of the praise it gets.
COMMENT AND DISCUSS
blog comments powered by Disqus