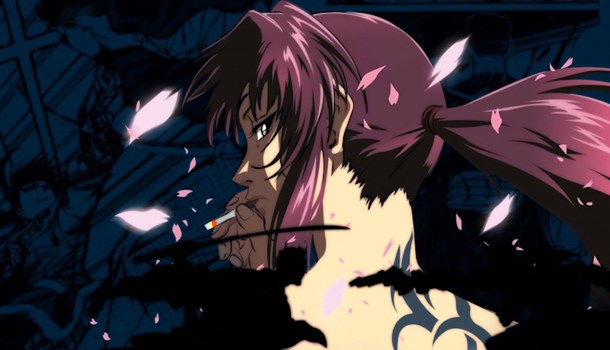 What is it about villains and their introductions? There must be something about the villainous or criminal consciousness which requires their egos to be acknowledged. Having never met anyone who actually fits this description I am uncertain whether this is true or whether a fabrication of the world of fiction.

Case in point; you wear a big cape, perhaps some nice shades and hair which is two strokes from being flammable. Now why in the right mind would you advertise yourself with a loud booming voice, standing still on an open rooftop, in the middle of a fire fight. It just isn’t done in real life. Thankfully, Darwinism is rife within the real criminal world and we don’t have to worry about this stupidity, but in the world of Black Lagoon you only have to be Russian and insane for the bullets to curl around you...

As my good friend Andy stated quite correctly in the first volume review, the second series of Black Lagoon is very different from the first. A lingering darkness is now continuously present which simply was not there in the first volumes. In the transition between series the atmosphere has gone from being a semi-serious bullet strewn roller coaster ride to something which resembles a cold winter night in Grozny. Other than the fun with the colourful and stupid bounty hunters the focus of this series has changed to that of Hotel Moscow and their militaristic conquests, as well as the increasingly intricate and delicate relationship between Rock and Revy.

I am taking bets on whether they get it on as it’s been hit and miss since the beginning; they've got to give into the primal urges sooner or later haven't they? The question does have to be asked, what if they don’t? Will they just split apart? The answer to this question is coming, of that I am certain, and with the inclusion of the frankly stunning Yakuza daughter, the future of their relationship has never seemed more uncertain.

Well, now there is war, bloodshed and violence with the continued prevailing darkness, but that is exactly what I paid for!

Black Lagoon is as classy and entertaining as ever and this newest volume continues the tradition of hard, no-holds barred action, extremely strong characters, an ever changing storyline, and of course the “nun with a gun”.

As usual the acting is top class, the extras are nothing worth watching, the sound is best turned up to max...

9
Please sir, can I have some more?