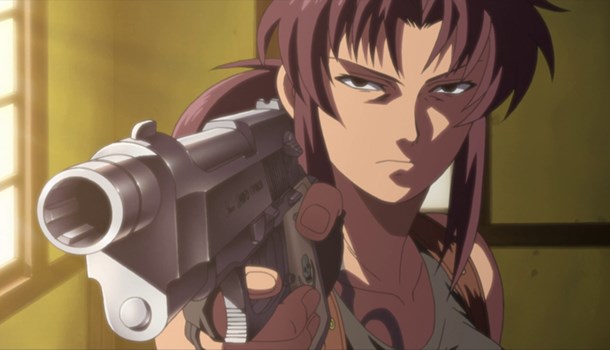 I have to confess that as of the moment this particular review disc landed on my doorstep, I hadn't watched (nor indeed particularly thought about watching) the original twelve episode run of Black Lagoon at all.  Thus, in the name of research I went scurrying off to pick it up and watch it in its entirety, at which point I was fully expecting to be able to wax lyrical about the suffering of the anime reviewer for his 'art'.

Except I liked it.  A lot.  A brilliant concoction of larger than life characters, breath-taking gun-play, lots of big explosions, and a portrayal of the dark underbelly of society that was at once both light-hearted yet often dark and brutal all gathered together to make for a simply excellent series.  If I'm perfectly honest, it was one of the most rip-roaring anime watching experiences I've enjoyed for quite some time.  With this knowledge in hand, I found myself more than a little keen to pop this DVD into the player for more of the same, and with the episode count for the four instalments offered up here starting at thirteen, that should be an early clue that more of the same is exactly what should be expected.

However, it appears that the success of the first series of Black Lagoon has spurred Madhouse (who are responsible for the series) on with new confidence - If the original batch of episodes were dark, the first three episodes on this particular DVD are absolutely pitch-black in their tone.  The story arc in question which covers these episodes involves some brutal mass murders which sets the various mafia organisations in the city on edge; a chain of events which have been instigated by two children, survivors of a past filled with death, child abuse and learning to kill to survive.

If that back story doesn't sound horrifying enough, no punches are pulled as this storyline proceeds, as we see these two children slaughtering and torturing men with glee, and indeed receiving some brutal treatment of their own.  While there are a few light-hearted moments sprinkled throughout these episodes, the overall feeling that you're left with is nothing short of grim and uncomfortable.  This isn't to say that the story arc is bad, far from it, but if this is your first introduction to Black Lagoon then be prepared.

After all that death and discomfort, the final episode on volume one of The Second Barrage is a breath of fresh air, as we return to a more 'normal' state of affairs - The focus returns a little further to the Lagoon Company crew (or Revy at least, who is always worthy of her screen time in some shape or form), with the story of a young money counterfeiter on the run from her employers acting as the perfect excuse for a full on shoot-out outside a church.  Unless you're deeply religious, there's a lot of fun to be had from a trainee priest rolling out automatic weapons and chain-smoking, whisky-swilling nuns packing pistols and quoting Bible verses that I'm pretty sure weren't in the original scriptures - It's action-packed, it's hilarious, what more could you ask for?

While part of me was a little disappointed at the darker, harsher tone of the start to this series compared to what had gone before, that isn't to say that it wasn't an excellent, high-quality offering, and to be fair it did at least give us a wider view of the world the Black Lagoon crew inhabit largely beyond their own misdemeanours.  Indeed, this particular volume highlights the versatility of the series - For all of those larger than life characters and their constant (and often amusing) banter, it can still pack an emotional punch when it wants to step away from simply offering up high-octane, over-the-top action.

Our very own Seb finished his review of the first volume of Black Lagoon by saying "Buy this. If you enjoy action, you’ll love Black Lagoon".  You know what?  I can't put it any more succinctly than that, so I'm going to steal that line for myself here.  Do what he says; he's right on the money.

8
Darker than a black coffee when the lights are out, but equally as hot and packing just as much of a punch. A must watch if you enjoy action-oriented anime.
LATEST REVIEWS