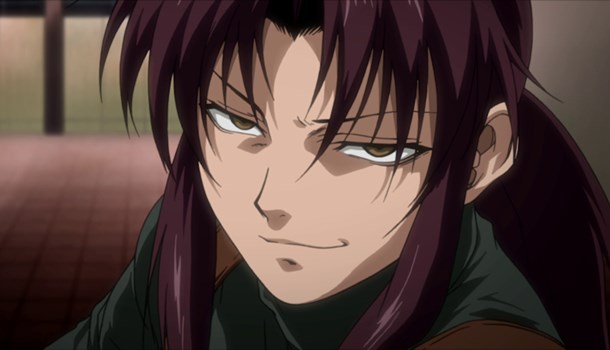 Ever since the disc plopped onto my “Welcome to my Cave” mat I have been stuck with the dilemma of what to do with it. After months of slowly but patiently enjoying the sheer awesomeness of Black Lagoon (I’m not the least bit biased am I?) I now have got to call an end to the adventure with this review of the final volume of Black Lagoon: The Second Barrage.

First things first, and the answer to the preliminary question that has been hanging since the series first started. Does Rock bed Revy? Unfortunately not. There are reasons for this which I will not go into, but frankly, this lack of a conclusion in their relationship only gives me hope that there will be further series in the future.

This final volume brings to a conclusion the “Hotel Moscow takes a visit to Tokyo” story arc, which started in the previous volume. At the end of the last disc the head of a Yakuza clan had just been assassinated by Hotel Moscow, his 16 year old daughter had taken his place, and a war against a highly organised former Russian military force was on the cards. As you can probably imagine with these circumstances, blood, like spice, will flow and this bloodshed inevitably leads to many unfortunate confrontations where many people die, many bullets are fired and the viewer is constantly left gripping the edge of their seats as the perfectly choreographed violence unfolds before their eyes.

Lack of romantic closure aside, what this volume does give us is some much needed additional character development in terms of the “strong women” Balalaika, Revy and now the young yakuza boss, Yukio. This volume shows us the similarity between these three women and their descent into the darkness. Balalaika, the former daughter of a military general, pushed through the press of the Soviet military, enduring the campaigns of Afghanistan, and was forced to find a place in the world for herself and her comrades after the Soviet Union collapsed, hence the organised crime; Revy, the disowned child of a loveless couple, beaten by the police and her elders and forced to find her niche, the gun; and now Yukio, the daughter of a yakuza clan boss becomes the new head of the family in order to save the lives of the men who have pledged their allegiances to the clan. Three women, all following the same path, all of them not afraid to die and all out to make their mark on the world as the “walking dead”.

This darkness thing really does throw out ol’ Rock who, (like me), likes to keep his options open. He sits in the “twilight” at a point between the light of his home and the darkness of the criminal underground. Although he feels he has already made his decision, he still has feelings and is remains undecided on exactly where he stands. This doesn’t exactly help his relationship with Revy, his ability to stay alive around Balalaika or his love interest with the young yakuza Yukio. Poor chap, he never seems to crack a single smile in this volume.

The Second Barrage Volume 3 is as good as everything (if not better than everything) that came before, except it comes with a fruity yet satisfying aftertaste that promises more for the future.

To summarise, Black Lagoon was to me a surprise when I first saw it. The series description offered a very simple premise which was girls with guns and plenty of violence. To be honest I was sold with that. But when I sat down, watched, and absorbed the various complex nuances of the series, the depths of the characters, the quality of the atmosphere and the superb action and violence I was frankly in love and that was before I heard the dialogue. F

9
A solid performance, right up to the finish. Roll on Series 3!