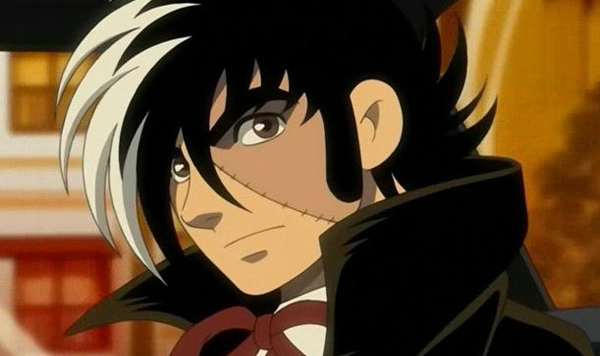 Sometimes there are great anime shows that don't gain the attention or fan base of far more inferior anime, they are ignored or forgotten, simply sleeper hits among the sea of more popular shows and films. Osamu Tezuka's Black Jack is one such feature, and one that proves Tezuka is worthy of his title as "God of Manga".

At the 1994 Olympic Games, an unusually high amount of athletes begin to break records, despite them having little or no talent in the sport they now excel in. As more records are broken, a mysterious unlicensed doctor under the alias of Black Jack begins to be pursued by a huge corporation, interested in the research of these new "Super Humans". To Black Jack's disgust, these new breed of incredible people are little more than infected guinea pigs, part of a huge conspiracy to attempt to play God. One of the more interesting aspects of Black Jack's plot is that it is unlike no other anime I have witnessed, it's a medical thriller, a unique combination of both the drama of a US medical dramas like ER, and the exhilarating feel of a film like Perfect Blue, even though the original Black Jack story preceded both the aforementioned shows.

The art style is quite odd considering its roots, as it does away with the cute, almost Disney-like style that Tezuka is famous for. Pinoko, Black Jack's daughter-figure and an Astro Boy cameo are about as close as it gets. If only they had updated it without losing the charm, similar to the later Tezuka-based film Metropolis, which has already enjoyed huge success over here on DVD. One odd thing about it's style is the odd manga-style painted stills that plague the rich animation, which although often nicely detailed, are better left where they came from. The dubbing, for the most part, suits the film well, but often sounds too wooden and unbelievable, as well as some careless translation mistakes. This film is better watched subbed, if you want to get a proper grasp of what's going on.

The DVD it's self is a big let-down, especially after we saw the classic Patlabor movies arrive on these shores with bonus unseen footage and in their own exclusive box set. There are no true extras to speak of, besides the Manga trailers, as well as a trailer for the film it's self. The menu is an eerie pumping vain, accompanied by some heavy breathing, which fits the mood well, and if you look closely, you can even see the original Japanese logo for Black Jack up in the corner. It may seem a little pointless to most, but purists will be impressed. Also of interest to collectors and fans is that this comes in it's own sturdy cardboard keep case, as well as the regular Amaray one inside, making it feel that little bit more special.

8
A disappointing DVD, but a curious sleeper hit that caught my imagination, and I hope it will catch yours too.
COMMENT AND DISCUSS
blog comments powered by Disqus