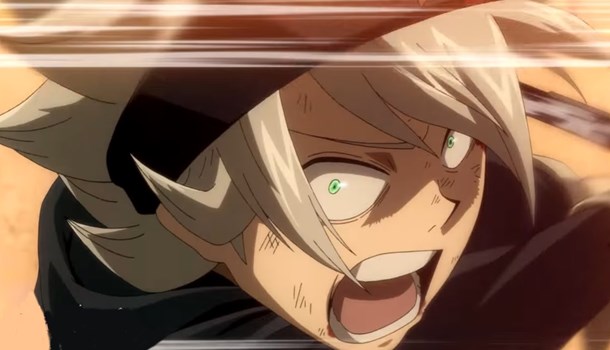 To be completely honest this review should have been written a little while ago, the thing is that I really couldn’t bring myself to write much of anything about Black Clover. The problem being that beyond “The main protagonist is incredibly annoying and shouts a lot” there’s really not much to say about the first three episodes of this series. To the point where this reviewer would likely have stopped watching, had I not agreed to review it for UK Anime Network. And truth be told I’m quite glad I don't have to watch any more after this.

Thus far we have been introduced to our main character Asta and his best friend come rival Yuno, who are both orphans raised in a Church orphanage. They were abandoned at the Church shortly after birth and have lived there ever since. Asta and Yuno live in a world where everyone has some form of magical ability, everyone that is except for Asta. In the Kingdom of Clover when children turn 15 they are given the opportunity to become wizards by summoning a “grimoire”, a feat likely to be problematic for Asta due to his aforementioned lack of magic. Despite this both Asta and Yuno are determined to become wizards and earn the title “Wizard King”. Apparently the Wizard King was originally a legendary wizard, but this is now a title handed down to the Kingdom’s most senior wizard.

At this point in the series the plot is virtually none existent, while there is a lot of talk of the “Wizard King” there is very little in the way of substance. Currently, Black Clover doesn’t even show many hints at anything deeper, there is very little here which might hook the viewer's attention. In the first three episodes Asta has exercised - a lot - shouted - a lot - screamed at a nun, begging her to marry him - a lot - and just been generally annoying. It really shouldn’t be this way, the series is based on a popular manga by Yūki Tabata and is serialised in Shueisha's Weekly Shōnen Jump magazine. It is, by all accounts, a decent enough read.

Black Clover has been receiving a lot of comparisons to other shōnen series, with more than a few accusations that it’s “basically a rip off of Naruto”. I can see where these comparisons are coming from, but they do the the original a great disservice in the comparison. Taking the Naruto example, that was a series which hooked viewers early on with an interesting and relatable premise. Though it ended up stretched out a lot longer than was ideal, and stuffed full of filler episodes, those early episodes were incredibly compelling viewing. Black Clover on the other hand is at best trite and ridden with clichés.

That said, there is one area where the series excels, clearly a great deal of expense and effort has been expended on the series visuals when compared to other, similar, shōnen series. Therefore Black Clover’s animation is a notch above the likes of Naruto, Bleach, One Piece, Boruto, et al.

So, as you’ve probably surmised Black Clover isn’t really a series we can recommend based on these early episodes, but will it get any better? One can only assume so, given the popularity of the source material. Though unfortunately these opening episodes may just prevent many viewers from sticking around to find out.

You can currently watch Black Clover in streaming form on Crunchyroll.

4
A poor start to what had seemed to be a very promising new series.
LATEST REVIEWS