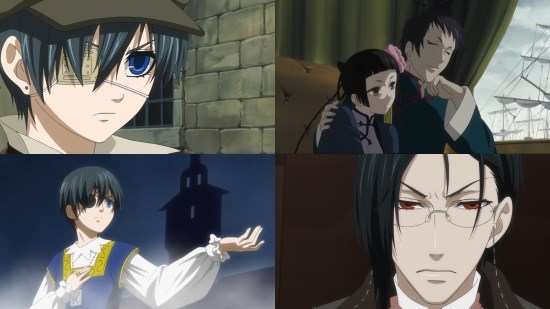 After a first act that contained elements that hit (spooky drama) and miss by a mile (comedy pratfalls), Sebastian and his Lord Phantomhive return to bring events to a close. Does the ensemble manage to pull it together for a triumphant hurrah?

Firstly, the pace is pretty good across the episodes - yes, there's the odd filler episode, the most notable being the haunting of a castle by a deceased king and his brother, but the series story arc is in full swing now, and certain elements gel more favourably than they did before.

Ciel is just as cold as ever, though there are moments when his humanity creeps through the mask, and the show is all the better for it. Likewise Sebastian shows moments of genuine emotion, which adds a subtle layer to a character who could conceivably be seen as smug in previous episodes.

Highlight of these episodes for me has to be the flashback to the earlier life of inept housekeeper Mei-Rin - to take the most irritating character in the series (largely thanks to the mockney stylings of Monica Rial in the English dub) and turn her into a mini skirt-wearing uber-assassin is pure genius, though it does make me long for a series that revolves around her. Oh, the possibilities...

It's not all plain sailing though - the plot does fumble about a bit in places, especially when dealing with Chinese gangster Lau and his rather attractive partner Ran-Mao. Their motivations just seem bizarre given that their misgivings simply required a five minute conversation.  Similarly, one particular reveal about the events directly after Ciel's torture that led to his pact with Sebastian seemed a bit too neat, but these are minor nitpicks really.

The finale is quite moving as the pact takes its inevitable course, with Sebastian's smooth tones making the moment quite tender. Everything appears to end in a very final manner, but given that a second series has been released, it would appear that the adventure isn't over yet. I had to Google the ending to see how they could possibly get around things, and it's actually quite clever. See if you can spot the get-out clause!

Overall Black Butler manages to deliver on its promises - it brings pathos, tragedy and revenge (and sadly the same crap humour, though less of it now). The series aesthetic is as lovely as ever, and with some genuinely surprising twists, it's a series that's worthy of a spot in your collection.

Can you believe that someone thought it was a good idea to add a single episode commentary featuring the there idiot servants from the house, in character? I mean seriously, twenty-five minutes of Monica Rial's screeching cockney? Find the guy responsible and slap him. Hard.

8
A wonderfully atmospheric series that gets a solid balance of action and intrigue pretty much spot on.