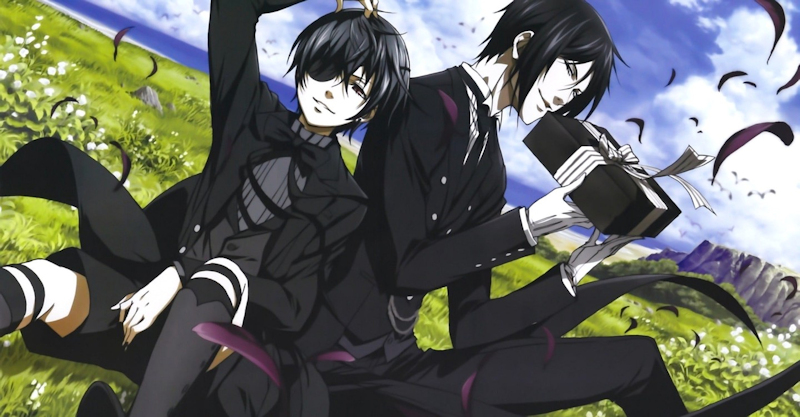 Ciel Phantomhive is the last of the Phantomhive dynasty, a family that has considerable wealth, power and influence. Forced to watch his parents brutally murdered, and then tortured to within an inch of his own life. As an act of desperation he makes a deal with a devil, and now his soul belongs to his capable and demonic butler Sebastian.

Now the pair act as the Queen's enforcers, with young Ciel knowing that each day is another step toward losing his soul.

I'm reliably informed that girls go nuts for this series, which puts me in a slightly odd position since I may be the wrong gender to judge this. That said, I loved Fruits Basket, so who knows?

Set in Victorian London, the series has some lovely touches, from the detailing throughout the interiors to the sweeping shots of London's streets, it certainly looks the part.

Early episodes are on the lighter side, as these things often are. The comedy revolves around the servants in the manor, who are a bunch of complete morons who could burn a boiled egg. You do have to wonder why such a serious young man who clearly doesn't suffer fools would surround himself with incompetent muppets who spend more time wrecking the place than they do serving in it.

Sebastian keeps the show together in more ways than one. His polite, competent nature hides a more malicious side to his character, often shown by a rather delicious smile just before taking out his prey. The occasional slight asides do serve to bring a little more menace to his character, and this develops more over the rest of the volume.

The action is handled well, and the vicious streak running through the show is at odds with the rest of the comedy characters. In this respect it reminds me of Chrono Crusade, though Black Butler has yet to reach the same depths of despair of that particular series.

If there's a flaw with the show, it lies in the ensemble cast. You cant help but feel that without the forced comedy, the show would be far more watchable. Even more off-putting is the dub, which is bloody awful. Monica Rial appears to have adopted what can only be described as "Screaming Mockney" - despite the murder and mayhem prevalent in the series, her portrayal of Mei-Rin is the scariest thing in the show. For the love of God, watch this subtitled.

Ciel himself isn't particularly sympathetic either, though I'd prefer even his company to that of his fiance, who narrowly escapes a slap from her betrothed. This injustice is probably the most criminal act in the show - and it features Jack the Ripper for God's sake!

I can see why our female friends might enjoy this - yes, it has silly moments, but it features a hot bishi in a suit, cake and violence in a romantic historical setting. It didn't really push my buttons, but if you can put up with a bit of daft prat-falling, you can still find the heart of a solidly macabre thriller beating away under the sugar and spice.

7
It has much that will appeal to the intended audience, and if you can take the 'comedy' you may just find yourself with a wicked grin too.
COMMENT AND DISCUSS
blog comments powered by Disqus